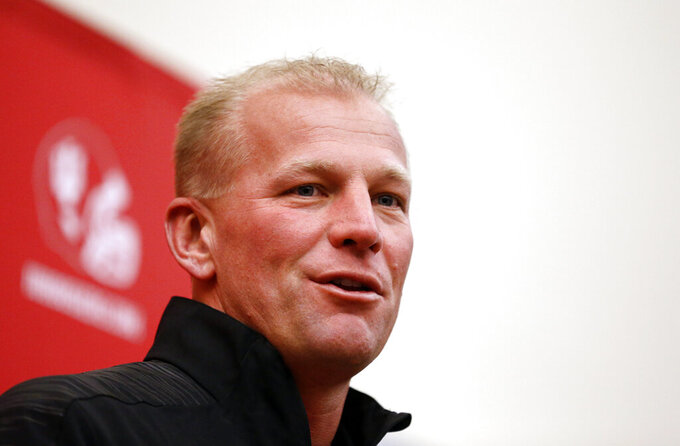 FILE - In this Jan. 25, 2019, file photo, Indiana's offensive coordinator Kalen DeBoer answers questions from the media during an NCAA college football news conference in Bloomington, Ind. The new offensive coordinator is taking advantage of different types of motion and has given his quarterbacks more freedom to change the play calls. (Jeremy Hogan/The Herald-Times via AP, File)

BLOOMINGTON, Ind. (AP) — Kalen DeBoer already has made his presence felt at Indiana.

The new offensive coordinator plans to take advantage of more motion, giving his quarterbacks more freedom to change plays and even occasionally line up behind center. Some view it as a welcome change after the Hoosiers finished one win short of becoming bowl-eligible each of the past two seasons.

"We'll be pretty basic, it's what you do when it's on TV," DeBoer said earlier this week. "So we'll narrow it (the playbook) down considerably, but I'm sure you'll see some differences."

It's unclear what exactly fans should expect because DeBoer & Co. don't want to give anything away this early.

What is clear: DeBoer has a track record of success.

In five seasons as head coach at his alma mater, the University of Sioux Falls, DeBoer went 67-3 and won three NAIA national championships. Then it was off to Football Championship Subdivision powerhouse Southern Illinois, where he helped the Salukis upset 10 ranked opponents in four seasons.

He took the coordinator's job at Eastern Michigan in 2014, inheriting an offense ranked No. 111 in the Football Bowl Subdivision. Three years later, the Eagles were No. 35 and off to their first bowl game in 21 years following the nation's largest single-season improvement — six more wins.

It happened again at Fresno State. DeBoer was hired in 2017, and took the Bulldogs' offense from 120th to 47th in two seasons. And in 2017, Fresno State became the second program in FBS history to go from double-digit losses to double-digit wins, finishing 10-4.

But Indiana's players have embraced their new play-caller for a different reason.

"If we see certain things, we have an opportunity to change it," incumbent quarterback Peyton Ramsey said. "I would say that's a little bit different because when you play a tempo offense, sometimes you get stuck in bad plays and you just have to accept it."

First, though, the Hoosiers must determine who plays quarterback.

Ramsey won the starting job four games into the 2017 season then gave it back following a knee injury that kept him out of the final four games. Last summer, Ramsey won back the job by holding off highly touted recruit Michael Penix Jr. and graduate transfer Brandon Dawkins.

This year, Ramsey will be pushed again when Penix returns from last season's torn anterior cruciate ligament this summer. Plus, another highly touted redshirt freshman, Jack Tuttle, has joined the mix after receiving an NCAA waiver to compete immediately after transferring from Utah.

Again, Indiana fans must wait to get their first glimpse of the quarterback derby.

Penix has been limited to non-contact work this spring and isn't expected to play Friday. Last week, Allen announced Tuttle would miss the rest of this spring with an illness.

But instead of fretting, DeBoer continues to move ahead by installing the offense quickly and smoothly.

"I think they're starting to understand the capabilities of this offense and now it's time to reflect on it and get in sync and make it theirs," DeBoer said. "And we'll get a chance in the fall to reinstall it."