Corral, Ole Miss take down No. 7 Indiana in Outback Bowl 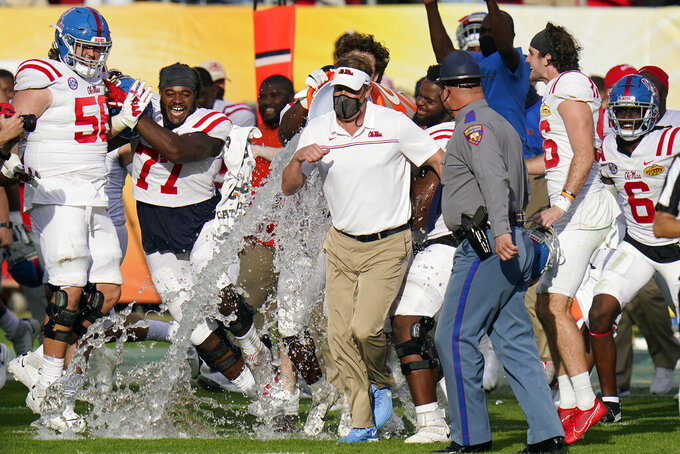 TAMPA, Fla. (AP) — Even before Mississippi took the field for the Outback Bowl, the Rebels felt good about the direction they're headed.

Coach Lane Kiffin was rewarded with a new contract despite having only been at the school one season. There also was no guarantee one of the nation's lowest-ranked defenses would be able to slow down No. 7 Indiana enough to ensure the team's first non-losing record since 2017.

“It’s really only up from here," quarterback Matt Corral said Saturday after throwing for 342 yards and two touchdowns to pace a 26-20 victory that ruined the finish to surprising Indiana's breakout season.

Corral’s 3-yard pass to Dontario Drummond put the Rebels (5-5) ahead for good with 4:12 remaining.

The Ole Miss defense, which allowed 535.7 yards and 40.3 points per game during the regular season, came through with one more stop to clinch the school's first bowl win since beating Oklahoma State in the 2016 Sugar Bowl.

“We talked about it all week. We’re going to need that,” Kiffin said. “We were not going to go score 60 points. ... We knew it was going to be a struggle, and it was great to see the defense play like they did.”

Drummond finished with six catches for 110 yards. Corral completed 30 of 44 passes without an interception, including a 5-yard TD throw to Casey Kelly that put Ole Miss up 13-3 midway through the second quarter.

Jack Tuttle was 26 of 45 for 201 yards in his second start in place Michael Penix Jr. for Indiana (6-2), which lost its star quarterback to a season-ending knee injury in late November.

Stevie Scott III rushed for 99 yards and scored on runs of 3 and 2 yards to help Indiana wipe out a 20-6 deficit in the fourth quarter.

Ole Miss missed the extra point after Drummond’s go-ahead TD catch. leaving Indiana with an opportunity to pull out its first bowl win in nearly 30 years.

The Hoosiers, who don't have a postseason win since the 1991 Copper Bowl bowl, drove to the Rebels 33 before stalling and turning it over on downs.

“They made enough plays to come up with the win. I’m disappointed for our players," Indiana coach Tom Allen said. "They have been through so much, sacrificed so much and worked hard. This one is going to hurt for a while.”

Indiana created a stir by removing Big Ten logos from their uniforms before the game, sparking speculation of a rift between the Hoosiers and the conference after the team did not receive a berth in a New Year's Six game.

The Big Ten logo was replaced by an Outback Bowl logo on jerseys, and the letters “LEO” were added to helmets.

Allen issued a statement to clarify “what we are wearing on our uniform and helmet,” noting that ever since he took over as coach at Indiana the program’s mantra has been “LEO, Love Each Other.”

“This season has been the most trying we will ever experience, and we felt it was appropriate to showcase LEO, which has carried us through one of the most historic years in Indiana football history,” Allen said. “We did not intend to show any disrespect to anyone. We are a proud member of the Big Ten and are always representing our conference.”

Ole Miss: The Rebels appeared in a bowl for the first time since in five years, finishing on a winning note despite playing without two of its most productive offensive players — receiver Elijah Moore and tight end Kenny Yeboah — who opted out of the remainder of the season to focus on the NFL draft.

Indiana: The Hoosiers were not happy about not being selected to play in a New Year’s Six game. Saturday’s loss concluded a season in which they turned heads by beating traditional Big Ten heavyweights Penn State, Michigan, Michigan State and Wisconsin and losing narrowly to CFP finalist Ohio State on the way to their best start since 1993.

The loss could cost Indiana what likely would have been a Top 10 finish in the final AP Poll.

By John Zenor 42 minutes ago
By Pete Iacobelli an hour ago
an hour ago
By Ralph D. Russo 5 hrs ago
By Ken Powtak 18 hrs ago