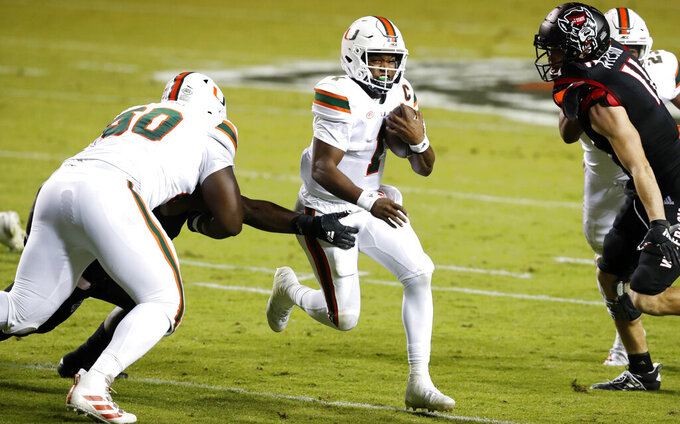 RALEIGH, N.C. (AP) — When No. 11 Miami needed to make plays, D’Eriq King said he had faith in his teammates.

In turn, the Hurricanes figured they had the right guy at quarterback

“I had no doubt we could go down there (and score),” King said. “I just trust those guys. Everybody out there. … It’s just about winning games. That’s all I care about.”

“The guys believed in each other and they did what they needed to do to get it done,” Diaz said. “We’ve got a connected football team. We’ve got guys who fight for each other. … We never expected this game to be easy.”

King ended up with season-high totals through the air and on the ground.

Harley also had a 20-yard TD catch in the second quarter. He finished with 153 yards on eight receptions.

Zonovan Knight had a 100-yard kickoff return to put NC State (4-3, 4-3) on top in the third quarter. Bailey Hockman was 19 for 28 for 248 yards and two touchdowns for the Wolfpack. He had a pass intercepted by DJ Ivey after Miami’s final touchdown.

“They made a big play they needed to and we didn’t,” NC State coach Dave Doeren said. “Just couldn’t put them away. They made one more play than we did at the end.”

Knight also had a 1-yard TD run in the third quarter for his first touchdown.

NC State padded its lead to 41-31 on Christopher Dunn’s 53-yard field goal on the first play of the fourth quarter.

Josh Borregales kicked three field goals, connecting from 38 and 22 yards in the fourth quarter. The latter came with 6:12 remaining after the Hurricanes were within a half-yard of the end zone before a fourth-down penalty.

“It made sense to kick the field goal,” he said. “It shows what kind of coach he is. He trusted the defense.”

Earlier, Hockman handed off to receiver Thayer Thomas and then received the ball back and ran behind a convoy of blockers for what was ruled a 31-yard touchdown pass play on the game’s opening possession. It was the first touchdown reception for a Wolfpack quarterback since Philip Rivers in 2000.

The Hurricanes, coming off a 19-14 home victory over Virginia, had a 21-14 lead less than 16 1/2 minutes into the game. NC State led at halftime on the strength of Hockman’s 9-yard touchdown pass to Cary Angeline with 2:49 left.

“The way we practiced for this game was as unusual as any game I’ve been a part of,” Diaz said. “It hasn’t been easy.”

Miami: The Hurricanes outscored their first six opponents by a combined margin of 57-23 in the second quarter. But NC State’s 10-7 edge produced a 24-21 lead, marking only the second halftime deficit of the season for the Hurricanes.

NC State: Angeline, a redshirt senior, has caught at least one touchdown pass in five of the Wolfpack’s games. NC State won the other four games.

Miami could move back into the Top 10 after four weeks outside of that territory.

With a victory, NC State would have been a candidate to climb back into the rankings. The Wolfpack spent one week in the Top 25 following a three-game winning streak before dropping out with a loss to then-No. 14 North Carolina.

Four of Miami’s first six opponents failed to reach the 20-point mark. Then the Wolfpack held a 24-21 halftime lead

“It was a challenge for us to stay together,” defensive end Jaelan Phillips said.

Miami: At Virginia Tech next Saturday.