Dykes introduced at TCU, always knowing what it could be 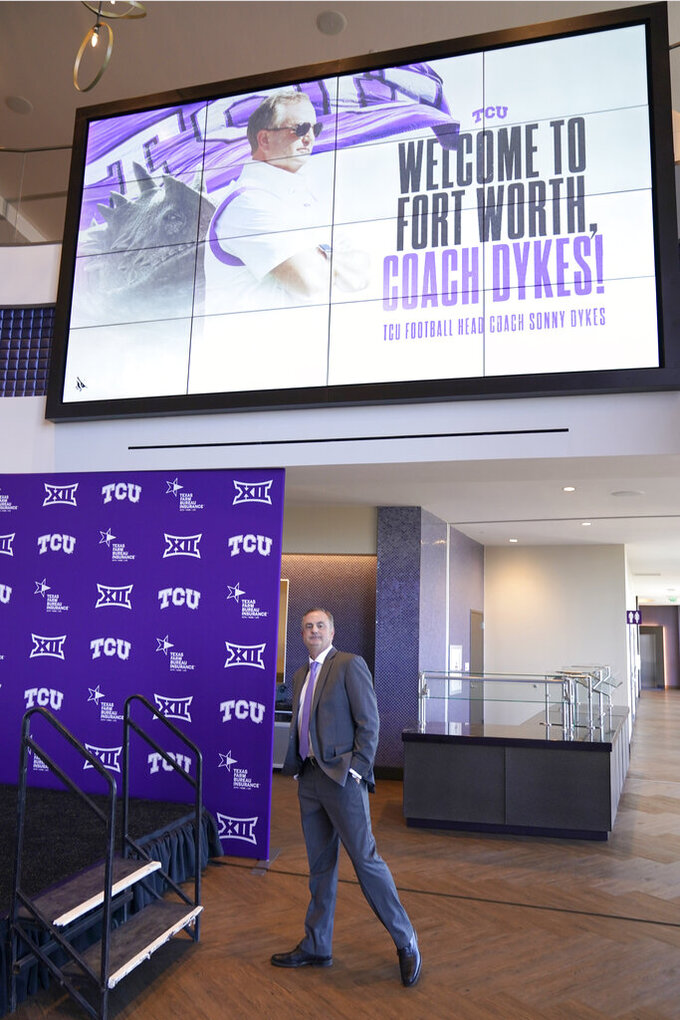 FORT WORTH, Texas (AP) — Sonny Dykes got an up-close look at TCU during one season working as an offensive analyst for the head coach he would replace four years later. The Texas native and son of a former Southwest Conference coach knew a lot about the school long before then.

“Growing up in Texas, I always knew what this place could be,” Dykes said Tuesday as he was introduced as the Horned Frogs new coach.

“It was the best hire for us, the best fit,” athletic director Jeremiah Donati said. “Best short-term and long-term fit for TCU, Sonny Dykes was that guy. When you talk about his plan to recruit DFW, and the fact he knows this place, he knows what it’s going to take to win here.”

Gary Patterson won a school-record 181 games in 21 seasons with the Frogs, including the Rose Bowl to cap an undefeated 2010 season. But they are 23-24 the past four years, and finished 5-7 this season by splitting their final four games after Patterson and the school mutually agreed to part ways Oct. 31. TCU’s only Big 12 title came in 2014, its third year after joining the Power Five league.

Dykes got a six-year contract at TCU after four seasons on the other side of the Dallas-Fort Worth metroplex at SMU. The 52-year-old son of former Texas Tech coach Spike Dykes went to the Mustangs after working the 2017 season in an off-field role for Patterson.

“It was really an eye-opening experience for me to just see what kind of place it was,” Dykes said. “I always knew it was good looking from the outside-in, but having a chance to be here for a year really opened my eyes to what an incredible place this is.”

Donati told those gathered inside the Legends Club & Suites overlooking the field that Dykes completely fit the criteria for the search committee. Those included being a proven head coach, having a detailed plan to recruit the state of Texas with an emphasis on Dallas-Fort Worth and dealing with the new realities of college football such as the transfer portal and name, image and likeness compensation for players.

The former Cal and Louisiana Tech head coach was 30-18 at SMU, overseeing the must successful stretch for the Mustangs in the three decades since being the only program shut down by the NCAA's so-called death penalty. They had an influx of transfer players, most of them returning home to North Texas like quarterback Shane Buechele.

NFL Hall of Fame running back LaDainian Tomlinson, who played at TCU from 1997-2000 and was part of the search committee, said they wanted a coach that could lead the Frogs into the new generation of college football.

“He’s done that at SMU. You think about the resources that we can provide for him. He should be able to take us even to a higher level,” Tomlinson said. “Not to say that Gary couldn’t. It was just time for, as we’ve said before, a new era of football.”

Among the assistant coaches joining Dykes from SMU is offensive coordinator Garrett Riley, the younger brother of Lincoln Riley, the head coach who just left Oklahoma for USC.

With the early signing period only a couple of weeks away, Dykes and his coaches are focused on recruiting. There will also be the re-recruiting of current players, including running back Zach Evans, who is TCU’s only five-star signee and put his name in the transfer portal after two seasons with the Frogs.

Tomlinson, whose nephew is a standout cornerback on the team, said Dykes' first meeting with the team Monday night went well.

Dykes said he has spoken with Evans, and Tomlinson hoped to as well.

“I don’t know what Zach is going to do, but I would be surprised if he left,” Tomlinson said. “Heck, I threatened to transfer at one time. ... But I stayed, and so hopefully I’ll have a chance to talk to Zach at some point.”