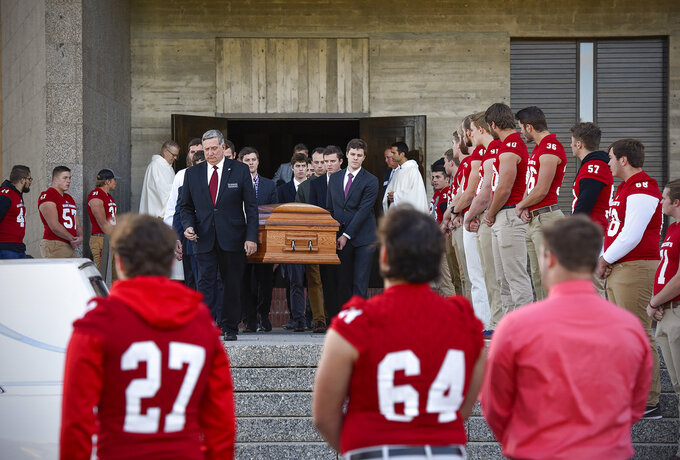 St. John's University football players stand solemnly as the casket of long time St. John's University football coach John Gagliardi is carried to a hearse Monday, Oct. 15, 2018, at the St. John's Abbey in Collegeville, Minn. Using unconventional methods at the small private university in Minnesota, Gagliardi won more football games than anybody who has ever coached in college. Gagliardi died Sunday, Oct. 7, 2018, at the age of 91. (Jason Wachter/St. Cloud Times via AP)

About 1,500 people filled St. John's Abbey Church in Collegeville, Minnesota, on Monday for Gagliardi's funeral. He died Oct. 7 at the age of 91.

The St. Cloud Times reports that as Gagliardi's coffin was wheeled to the hearse, the St. John's football team, wearing their jerseys, stood in his honor.

The Rev. Tim Backous officiated and compared Gagliardi's life as coach to other greats, including Mozart and Shakespeare.

Gagliardi retired in 2012 after a record 64 seasons as a head coach, with 60 of those at St. John's. He finished with 489 victories, 138 losses and 11 ties, winning four national championships with the Johnnies.