Florida State says it won't overlook UMass with Clemson next 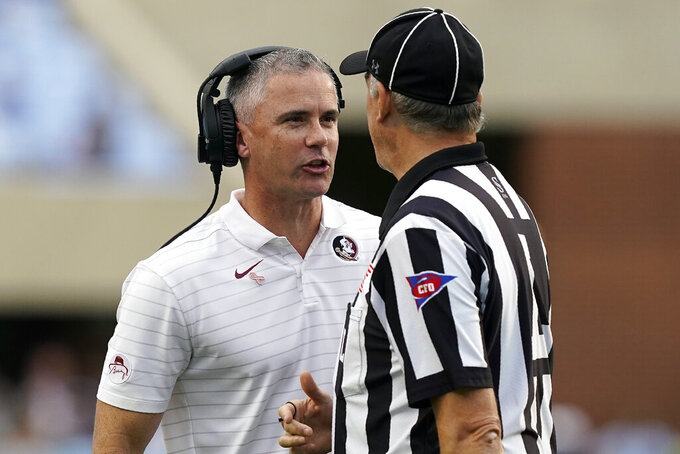 TALLAHASSEE, Fla. (AP) — As Florida State prepares for Saturday’s game against UMass, it would be easy to expect the Seminoles to focus their attention instead on a rivalry game with Clemson on Oct. 30.

“I can promise you we’re not going to look past anybody,” said Florida State coach Mike Norvell, who has seen his team bounce back from an 0-4 start with two wins that have pumped life back into the program. “My focus is 100% on our football team, where we are, and this week. … The thing I believe we’ve all learned, you’ve got to maximize the one that’s in front of you.”

Norvell didn’t have to say the words “Jacksonville State.” That was inferred.

Florida State’s demoralizing loss to the FCS program in Week 2 is still fresh and a reminder not to jump ahead, even when it’s tempting to do. After UMass, the Seminoles (2-4) will play their three biggest rivals — Clemson, Miami and Florida — in a span of five weeks.

Florida State looks like a completely different team than it did during an 0-4 September in its last two games — wins over Syracuse and at North Carolina. In the victory over the Tar Heels, Florida State did not have a dropped pass, didn't allow a sack or turn the ball over. The defense grabbed an interception and has made fourth-down stops in the red zone in back-to-back games.

Bell was Florida State’s offensive coordinator in 2018 and the season ended with a shaky 5-7 record. But it was a stop on his coaching journey and also helped him land a job as UMass’ head coach.

“It was a tough eight months just based on wins and losses and expectations,” Bell said. “But it was a great opportunity for my family and just great to be at a place with an unbelievable football tradition like Florida State.”

Bell, who is just 37 and is the fifth-youngest FBS head coach, is 2-20 in three seasons at UMass. The Minutemen (1-5) had lost 16 straight games before knocking off UConn 27-13 two weeks ago.

Some other things to know about Saturday’s game:

Florida State committed a combined 27 penalties in its first three games but has played significantly cleaner of late. In their last three games, the Seminoles have been penalized just 12 times.

Ellis Merriweather has 87 carries for 415 yards and is UMass’ best offensive weapon. Merriweather is coming off his best game, in which the 6-foot-2, 225-pound back had 39 carries for 171 yards in a 27-13 win over UConn on Oct. 9. The Minutemen had 247 rushing yards vs. the Huskies, the most the program has accumulated in a game since 2018 (also vs. UConn).

Florida State’s Jermaine Johnson has 44 tackles, the most in the nation by a defensive lineman, and his seven sacks leads the ACC. It is the most sacks for a Seminole since Brian Burns had 10 in 2018.