Football brings some peace to Sioux family after suicide 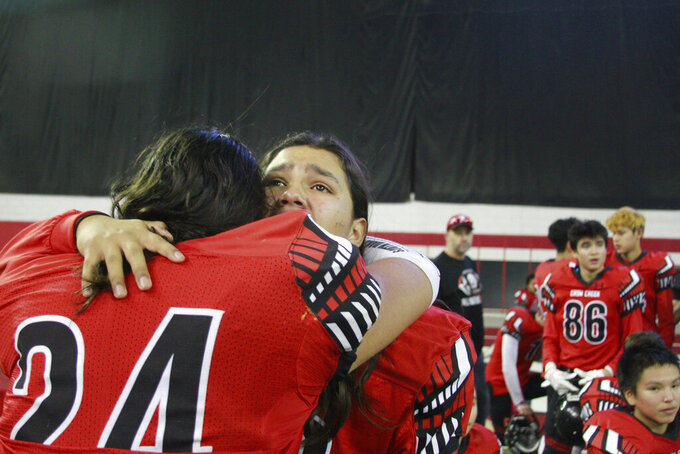 In this Nov. 8, 2019 photo, Jashawn Pease, right, embraces his brother Jayton, as they celebrate their 74-39 victory in the All Nations Football Conference championship in Vermillion, S.D. Jashawn and Jayton Pease shed tears as the Crow Creek Chieftains won the first All Nations Conference championship, and then remembered their older brother _ one of too many American Indians to die by suicide on a reservation with the highest suicide rate in South Dakota. (AP Photo/Stephen Groves)

VERMILLION, S.D. (AP) — As siblings Jashawn and Jayton Pease embraced in the end zone while celebrating their tribal school’s All Nations Conference championship win, tears streamed down their faces for the older brother who wasn’t there.

The July 2018 suicide of 17-year-old J’von Justice Shields, who also played for the Crow Creek Chieftains, illustrated an all too common tragedy in Native American communities, where the suicide rate among 15- to 24-year-olds is more than triple that of any other racial and ethnic group in the country.

This football season became a source of pride for the Crow Creek Sioux community and an opportunity for Jayton and Jashawn to achieve their brother’s dream of winning at “The Dome” in Vermillion, where football championships are decided.