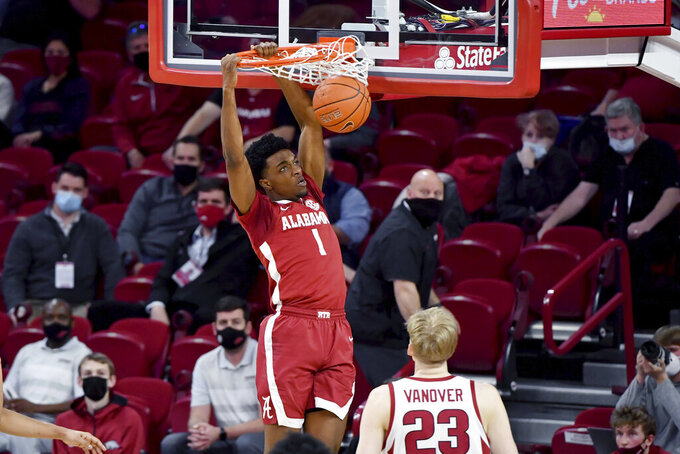 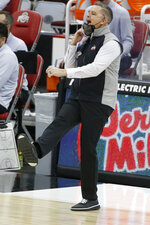 Ohio State and Alabama competing for a national championship is hardly an unusual occurrence for either school. It just tends to happen in football.

Six weeks after the Crimson Tide's national championship game win over the Buckeyes, it just so happens that the two schools have a pair of the nation’s best basketball teams.

No. 4 Ohio State and No. 6 Alabama are hardly playing the part of sidekicks to football. Both are vying for high NCAA Tournament seed s and the Tide is trying to win its first Southeastern Conference title since 2002.

Alabama coach Nate Oats finds it “kind of absurd and ridiculous” when opposing coaches try to use that gridiron prowess as a negative against the Tide for hoops recruits.

“Yeah, football’s great here. They win national championships frequently,” said Oats, ’Bama’s second-year head coach. “It also brings in a lot of money. It also shows that the athletic department as a whole is real healthy. There’s a lot of positives that come with having a great football program. I think you see it here, you see it at Ohio State.”

In some ways, it’s a symbiotic relationship.

Football recruits get to see top hoops teams play on their visits, at least where there is not a pandemic. Basketball and other programs benefit from the resources generated by a football program raking in many millions. Both get loads of free publicity for recruits.

Ohio State basketball coach Chris Holtmann said the football team’s success definitely raises the profile of the brand, but he’s not sure how much it means to elite basketball players shopping for a school.

“You know, there have been some ebbs and flows in terms of our program and in overall high-level achievement or success,” Holtmann said. “I don’t know if that’s really reflected or coincided in any way with the football program here and their sustained excellence.”

The Buckeyes had their hopes for a No. 1 NCAA seed damaged with back to back losses to No. 3 Michigan and Michigan State. But they are still in the mix for a high seed.

Ohio State has had a strong basketball program well before this season, making the NCAA Tournament every year from 2009-2015. Ohio State made Final Four appearances in 2007 and 2012, a step Alabama has yet to take.

Alabama has only been to two NCAA Tournaments since 2006, but this has been a special year for Oats and his program. Alabama, which visits Mississippi State on Saturday night, is trying to close out its first SEC men's basketball championship since 2002. A high seed in the NCAA Tournament awaits; the Tide has never been higher than a No. 2 seed (1987 and 2002) and is projected to potentially match it.

Both teams have had strong seasons even after losing stars to the NBA, Ohio State All-American Kaleb Wesson and Alabama point guard Kira Lewis Jr.

This season, Tide football coach Nick Saban has been able to watch more games than usual, if only on TV, with coronavirus-related recruiting restrictions limiting his usual January and February travel. He thinks success from any other program, whether it's basketball or softball, benefits the others.

“I think there’s a lot of exposure lost if you don’t have good programs,” Saban said in a phone interview Thursday. "Just like for the basketball team to be doing well, be on ESPN, getting to March Madness and getting the exposure

“When you’re good at things it creates a lot of positive image and exposure for the university, and it’s a reflection on the athletic department's commitment to a standard of excellence.”

His program has been notable for both a wealth of titles and talent, and a hefty support staff. Oats has built out his own support staff to an extent, with the budget increasing more than $100,000 in the last fiscal year from Avery Johnson's final season in 2018-19, up to $575,000. He's doubled the number of graduate assistants to four.

It's nothing like the behemoth football staff, but Oats does have everything from a special assistant to the head coach to a director of operations and an operations coordinator.

On the court, Alabama forward Alex Reese is enjoying the ride.