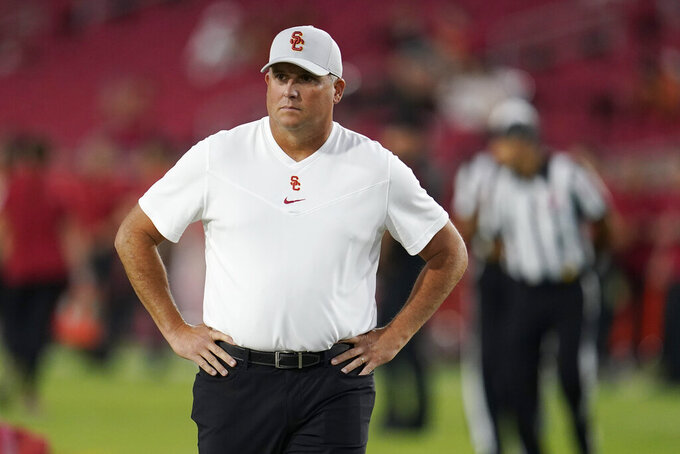 Helton was the first coach fired this season, and was two games into his eighth season at USC. The 49-year-old was 46-24 with the Trojans, including a Rose Bowl victory after the 2016 season and a Pac-12 title in 2017.

“I am very humbled to be named the head football coach at Georgia Southern University,” Helton said in a statement. ”The passion and love its alumni and fans have for the University are second to none. Georgia Southern has always prided itself on the highest levels of success, and I welcome those expectations.”

Georgia Southern fired coach Chad Lunsford after a 1-3 start to the season. The Eagles (2-6, 1-4 Sun Belt) are last in the Sun Belt’s East Division heading into Saturday’s game against No. 21 Coastal Carolina.

Georgia Southern won six national titles when it competed in Division I-AA, before moving up to the NCAA’s top college football tier in 2014 and joining the Sun Belt. For years, the Eagles were known for their triple-option offenses under coaches like Paul Johnson and Willie Fritz.

Helton was offensive coordinator at USC before being named interim coach when Steve Sarkisian was let go during the 2015 season, and eventually promoted to head coach. He brought stability to a program that had gone through almost a decade of turmoil.

The Trojans had two good seasons with Sam Darnold at quarterback to start Helton's tenure. But he couldn't sustain the success, and for more than three years his status at USC seemed tenuous. After a blowout loss at home to Stanford on Sept. 11, Helton was fired.

“Clay is renowned for not only his coaching abilities but for the person that he is," Georgia Southern athletic director Jared Benko said in a statement. “He’s an elite offensive mind who has produced record-setting offenses and high NFL Draft picks everywhere he’s coached.”