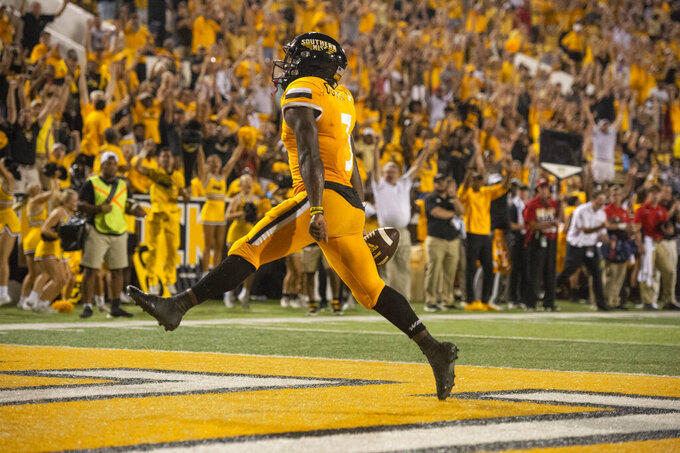 Southern Mississippi running back Frank Gore Jr. (3) runs the ball into the endzone for a touchdown during the second half of an NCAA college football game against Liberty in Hattiesburg, Miss., Saturday, Sept. 3, 2022. (Hannah Ruhoff/The Sun Herald via AP)

MIAMI GARDENS, Fla. (AP) — Frank Gore had a flair for drama when he played for the Miami Hurricanes.

There was a 12-yard go-ahead touchdown run late to cap a wild comeback win over Florida in 2003. A game-ending 18-run touchdown run in overtime to beat Florida State in 2004. A 1-yard score with less than a minute left to rally the Hurricanes past Louisville a month later.

He was fearless. And his son tries to play that same way.

No. 15 Miami (1-0) is a four-touchdown favorite over Southern Miss (0-1) going into the matchup on Saturday, but that doesn’t faze Golden Eagles running back Frank Gore Jr. whatsoever. Gore Jr. is returning to his hometown, to play his father’s alma mater, and sees it as nothing but a big opportunity.

“We’ll prepare like we do every other game,” Gore Jr. said. “They know we’re not scared of them. We ready. ... Everybody knows what time it is. We’re not backing down because we aren’t scared.”

That’s swagger. That’s a Miami football trademark. It’s not hard to figure out where Gore Jr. might have picked up such thinking.

The elder Gore tore both of his ACL’s while at Miami, yet still did enough at the school — 1,975 yards, 17 touchdowns in 27 games — to merit enshrinement in the Hurricanes’ Hall of Fame. And another Hall of Fame might await him one day, after he rushed for 16,000 yards in 16 NFL seasons and made the Pro Bowl five times.

Miami coach Mario Cristobal raved about what he sees from Gore Jr., who rushed for 178 yards and two touchdowns, plus threw a 48-yard pass in a four-overtime, 29-27 loss to Liberty in Week 1.

“He’s a stud,” Cristobal said. “First guy rarely brings him down. Very versatile; obviously they use him in all kinds of stuff, back in the wildcat, can chuck the ball around, he’s a good receiver as well. He’s a really dangerous football player, really good football player. We all know who he reminds us of.”

The Hurricanes, who scored 70 points in their season-opening win against Bethune-Cookman and rushed for seven touchdowns in that game, might get even more running back depth this week. RB Jaylan Knighton, who was held out of Week 1, is expected to be ready Saturday.

Miami and Southern Miss agreed to play this game three years ago, with the 2022 matchup the only one in that agreement. The Hurricanes are paying $1.5 million for this game, and Southern Miss has similar big-check games on the schedule for 2023 (at Florida State) and 2024 (at Ohio State).

Miami’s Key’shawn Smith had 184 yards on three kickoff returns in Week 1, the most kick-return yards by a Hurricane since Duke Johnson had 214 on four returns against Virginia on Nov. 10, 2012. Smith led the nation in kickoff return yards last week.

Gore Jr. is one of only five Southern Miss players who’ll be back in their home state of Florida for this game. It’s rare for Miami to play an opponent with so few Sunshine State players on the roster.