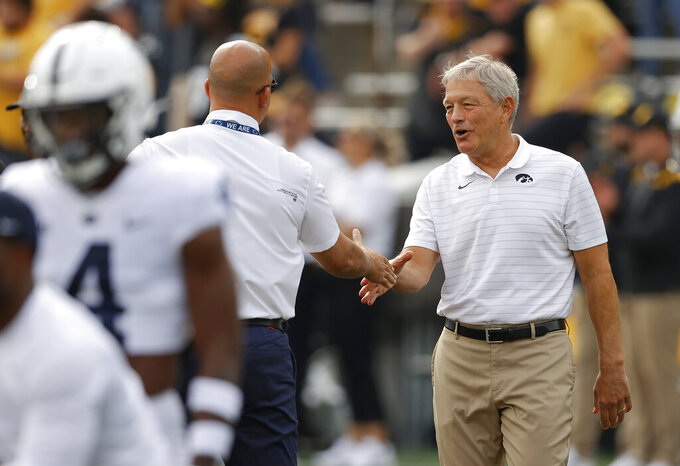 Penn State's James Franklin denied any of his defensive players pretended to be injured during the Iowa game — detailing each one who went down — in response to Hawkeyes coach Kirk Ferentz indicating he was suspicious of some of the stoppages in play.

“How does this strategy make sense against a huddle team?” Franklin said, referring to the methodical style of No. 2 Iowa's offense. “People use this strategy to slow people down. Spread offenses, tempo offenses. They huddle. So that strategy did not make sense in this situation."

Iowa fans booed while several Penn State players were being treated for injuries on the field during the Hawkeyes' 23-20 victory Saturday.

Ferentz on Tuesday acknowledged that some of the Penn State players had legitimate injuries but defended the Iowa fans, saying they “smelled a rat.”

“Nobody wants to see anybody get hurt,” Ferentz said, “But I think probably (the booing) is a reaction to, there were a couple of guys that were down for the count and then were back a play or two later. Our fans aren’t stupid. They’re watching, they know what’s going on.

“I’ve been here 23 years and I think that’s only the second time we’ve seen that kind of stuff going on.”

Franklin's response came Wednesday in a 12-minute session with reporters, during which he listed each player who was banged up and questioned how it would have benefited Penn State to remove some of its best players from the game. At least three of the players did not return to the game after going down.

If a player is treated for an injury on the field that causes the game to be stopped, the player must leave the field for at least one play.

Penn State also lost quarterback Sean Clifford late in the first half. The senior did not play in the second half. Frankin did not give an update on Clifford's status or provide details on his injury, as is his custom for those not believed to be season-ending.

No. 7 Penn State does not play this week and returns to action at home against Illinois on Oct. 23.