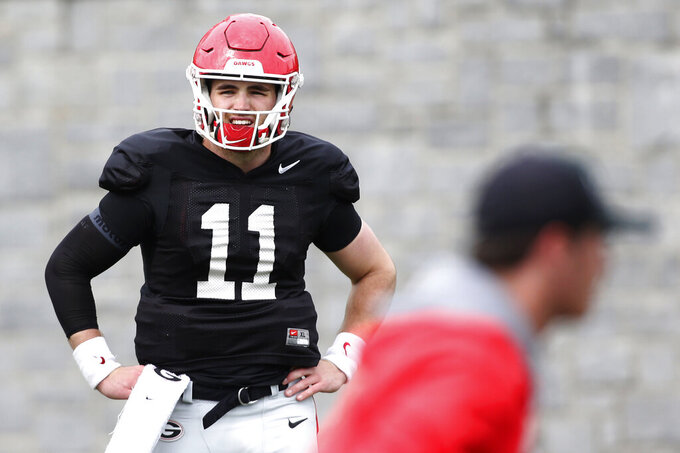 ATHENS, Ga. (AP) — Georgia's offensive coordinator, top three wide receivers and a 1,000-yard rusher have all departed since the end of the 2018 season.

The turnover has created the opportunity for changes in the Bulldogs' offense. That excites quarterback Jake Fromm, who is a football bookworm.

Fromm made a strong first impression on coach Kirby Smart as an early enrollee in 2017's spring practice by quickly learning the playbook. The quarterback remains eager to digest new football knowledge.

"For me, I want to learn new things," Fromm said at the start of spring practice last week. "If we change up the terminology every single year, I wouldn't be opposed to that because I like learning."

Now entering his third season as Georgia's starter, Fromm is the clear leader of the offense. He was the decisive winner in last spring's challenge from Justin Fields, who has transferred to Ohio State.

Transfer Stetson Bennett, back for his second stint with the Bulldogs, and freshman D'Wan Mathis are working behind Fromm at quarterback this spring.

There's no new challenge to Fromm's No. 1 status. The Georgia offense belongs to Fromm.

That doesn't mean Fromm is ready to relax, so he welcomes tweaks to the offense installed by James Coley this spring.

Coley, the Bulldogs' quarterbacks coach and co-offensive coordinator in 2018, now has full control of the offense after Jim Chaney was hired to run Tennessee's offense.

Fromm and Thomas are juniors in 2019, but this could be their last season. They were among select underclassmen who were invited to the NFL combine preview in Indianapolis last month.

Asked if his visit to the combine made him consider his NFL options for 2020, Fromm said "Yeah, a little bit. ... It definitely opens my eyes and gives me a different perspective about what's going on and how that transition takes place."

Until then, the transition on Fromm's mind is the adjustment to Coley.

While some players have suggested Coley might put more emphasis on Fromm's passing game, Smart warned against expecting dramatic change.

"Look, we've been really successful at running the ball," Smart said. "That's who we are at Georgia. We're not going to go recreate the wheel."

Georgia leans on the run but stresses balance. Fromm ranked fifth in the nation in passing efficiency while throwing for 2,749 yards and 30 touchdowns.

Georgia has won 24 games the last two seasons, including the 2017 Southeastern Conference championship. The Bulldogs lost to Alabama in last season's SEC championship game before losing to Texas in the Sugar Bowl to finish 11-3.

Fromm said the experience gained the last two years has boosted his confidence.

"I was talking to a lot of guys in my class and the senior class and was like, 'Hey, am I the only one who feels like this is getting easy, or is this a thing?'"

Few players talk about SEC football getting easy. Still, Fromm is relishing the challenge provided by a new coordinator's tweaks.

"It keeps me on my toes," he said. "I get to learn. I love learning and anything about football really intrigues me."