Georgia Tech wraps up a spring of major change 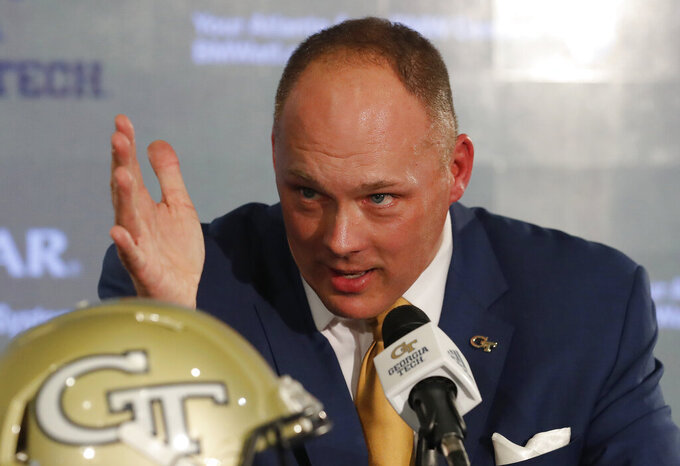 FILE - In this Dec. 7, 2018, file photo, newly hired Georgia Tech football coach Geoff Collins speaks during a news conference in Atlanta. Georgia Tech's offense has essentially spent spring practice trying to fit a square peg into a round hole. The transition from triple-option to no-huddle spread under new coach Geoff Collins is a daunting challenge on such short notice, especially for the guys in the trenches.(AP Photo/John Bazemore, File) 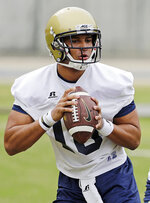 ATLANTA (AP) — Georgia Tech's offense has essentially spent spring practice trying to fit a square peg into a round hole.

The transition from triple-option to no-huddle spread under new coach Geoff Collins is a daunting challenge on such short notice, especially for the guys in the trenches.

"We're used to being on our toes," senior tackle Jahaziel Lee said after one of the final practices of the spring. "Now we're on the inside of our heels."

The Yellow Jackets wrap up this set of practices Friday night with a game-type scrimmage at Bobby Dodd Stadium, capping off a period that began with the team struggling to cope with the death of defensive lineman Brandon Adams, who collapsed near campus just days before the first workout.

The season opener against reigning national champion Clemson is roughly four months away.

While much of the attention has been on how the quarterbacks and receivers will adjust to an offense that actually requires an ample amount of passing, the massive linemen have been working on techniques that don't come naturally to many of them.

In the triple-option, the linemen took their stance with their weight forward, up on the toes, so they could drive forward quickly for the expected running play. Now, they have to stay back on their feet, keeping the weight on the inside of their heels, since they're just as likely to drop back in pass protection as set up for a run.

"You have power on the inside of your feet, but you have to learn how to produce that power and generate that power," Lee said. "It's more natural on your toes. You have to just build the confidence to get comfortable in that stance, to allow yourself to adjust to that and build that power. That's the hardest thing to me."

Under longtime coach Paul Johnson, the Yellow Jackets consistently ranked among the nation's top rushing teams but used the pass mainly as a diversionary tactic. In 2018, they ran the ball on more than 85 percent of their plays out of the triple-option. Johnson built his entire offense around a unique skill set, which meant signing quarterbacks that were more adept with their legs than their arms and seeking out linemen who were used to going forward rather than dropping back.

That's all changed under Collins, who was hired away from Temple after Johnson retired.

The new offensive scheme is all about playing at a fast tempo and maintaining a balance between the run and pass. Over time, Collins will be able to fully implement his vision in recruiting. But for now, he's got to make do largely with the players that Johnson left behind.

Brent Key, who came from powerhouse Alabama to serve as Collins' chief deputy and offensive line coach, has tried to keep things as simple as possible for the big men.

"At the end of the day, it's the offensive lineman's job to block the man in front of him," Key said.

Still, this is a major adjustment.

"It's been tough," said another senior holdover on the line, Kenny Cooper. "But every day you practice, it feels a little more comfortable."

The line will be bolstered by a couple of players who started their careers at other colleges.

Jared Southers is a graduate transfer from Vanderbilt and eligible to play right away, while Jack DeFoor was a backup last season for the Yellow Jackets after transferring from Ole Miss. Both have been getting plenty of work with returning starters Cooper and Zach Quinney.

DeFoor is certainly used to change. He initially signed with Ole Miss to play for Hugh Freeze, switched to interim coach Matt Luke in 2017 after Freeze was forced to resign, worked under Johnson after transferring to Georgia Tech, and is now facing another coaching change.

"This is my fourth offense I'm trying to learn," DeFoor said with a smile.

Meanwhile, junior Lucas Johnson has emerged as the favorite to start at quarterback after missing all of last season with a foot injury.

He's got the strongest arm of the three contenders and played a similar offense in high school. But there's no getting around the fact that Johnson's next pass will be the first he throws in a college game.

"I feel like just being confident, knowing the playbook, just knowing what you've got to do, makes it a lot easier," Johnson said. "That's really the biggest adjustment: reading defenses and knowing the right protections."

The Yellow Jackets also have sophomore Tobias Oliver, their backup quarterback in 2018, as well as redshirt freshman James Graham, who is perhaps the most athletically gifted of the group but has struggled with academic issues.

Graham is confident that he can thrive in the new offense.