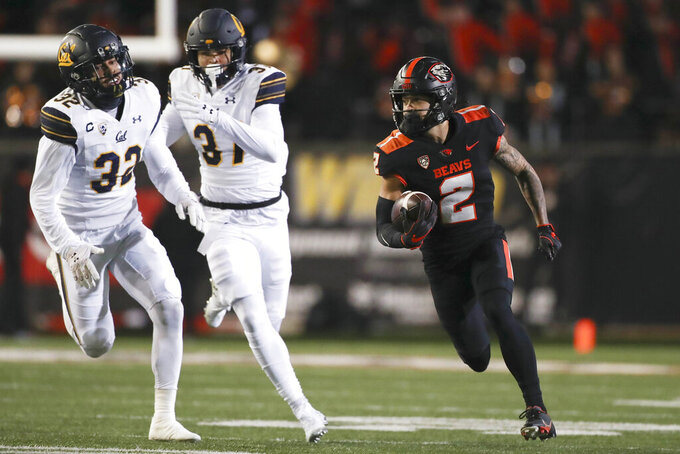 Oregon State wide receiver Anthony Gould (2) runs past California safety Daniel Scott (32) and wide receiver Kenden Robinson Jr. for a touchdown off of a punt return during the first half of an NCAA college football game on Saturday, Nov 12, 2022, in Corvallis, Ore. (AP Photo/Amanda Loman)

CORVALLIS, Ore. (AP) — Oregon State’s Ben Gulbranson threw for two touchdowns and ran for a score, and the Beavers’ defense turned in another strong performance in a 38-10 victory Saturday night over California.

Oregon State (7-3, 4-3 Pac-12) got a 55-yard punt return for a touchdown from Anthony Gould, and did enough offensively to control the game with 362 total yards. Damien Martinez had his fourth consecutive 100-yard rushing game with 105 yards on 23 carries.

Gulbranson completed 15 of 23 passes for 137 yards, and is 4-1 since replacing Chance Nolan as the Beavers’ starting quarterback.

Oregon State is guaranteed of having a winning season for the second consecutive year.

A week after scoring 35 points in a loss at USC, the Bears (3-7, 1-6 conference) were limited to 160 total yards and didn’t score an offensive touchdown. It was one of Oregon State’s most impressive defensive games of the season.

“If not the best, this was close to it,” said Oregon State linebacker Kyrei Fisher-Morris, who had a first-quarter interception that set up a touchdown.

Cal quarterback Jack Plummer was 22 of 34 for 151 yards and he was sacked twice.

Oregon State opened the scoring on Gulbranson’s 1-yard touchdown run, set up by a 37-yard pass from all-purpose standout Jack Colletto to Gould on fourth and 2 from the Bears’ 48-yard line.

Fisher-Morris intercepted Plummer on the ensuing possession deep in Cal territory. That led to a 5-yard touchdown run by Jam Griffin, extending the lead to 14-0 at 2:14 of the first quarter.

Gould’s punt return for a touchdown early in the second quarter – his second special teams score this season - gave the Beavers a 21-0 advantage.

“Everyone on the field did their job. It makes my job easy,” Gould said.

After Cal failed to convert on fourth down at the Beavers’ 18-yard line, the Bears defense made a big play.

Cornerback Jeremiah Earby scooped up Martinez’s fumble and returned it 33 yards for a touchdown, cutting the lead to 21-7 at the break. The Bears managed just 53 yards of total offense in the first half.

Everett Hayes booted a 49-yard field goal on the opening drive of the first half, extending the lead to 24-7.

An 8-yard touchdown pass from Gulbranson to Tre’Shaun Harrison gave Oregon Sate a 31-7 lead at 4:03 of the third quarter, and Gulbranson connected with tight end Jack Veiling for a 2-yard touchdown in the fourth quarter.

California: The Bears fell out of bowl consideration with a sixth straight loss and struggled offensively. Jaydn Ott, who entered the game leading all Pac-12 freshman in rushing with 725 yards, was limited to 20 yards on eight carries.

Oregon State: The Beavers took care of business at home, winning for the 10th time in the last 11 games at Reser Stadium since the start of the 2021 season. The only loss was a 17-14 setback Sept. 24 against USC. Gulbranson continues to be productive at quarterback in a ball-control offense.

California: Will host Stanford next Saturday.

Oregon State: Will be at Arizona State next Saturday.