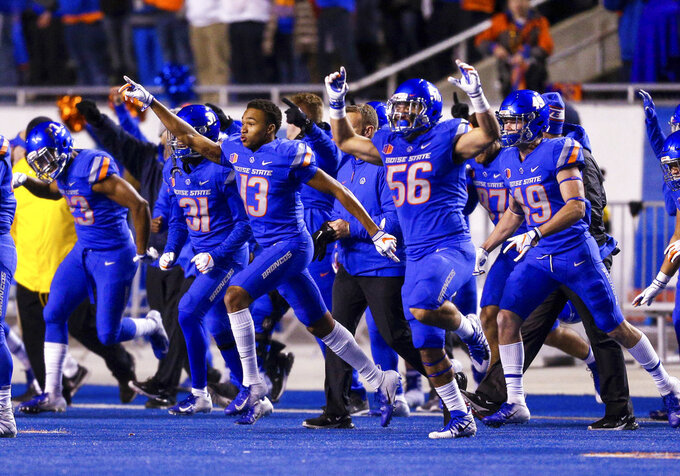 Jeff Tedford wrapped up Fresno State's regular-season finale last weekend and the second-year coach flipped on the television to see where the Bulldogs would be headed for the Mountain West Conference championship game.

To little surprise, the Bulldogs had to book a trip back to Boise, Idaho.

"It's not a surprise they are where they are. I think everybody understands they are an excellent program," Tedford said. "And it's a great opportunity for us to go and compete against what has for a long time been one of the elite teams in this conference."

The two teams know each other well and will be getting even more familiar with one another — if that is even possible — when No. 25 Fresno State faces No. 19 Boise State in the conference title game Saturday night. It will be the fourth time in barely a calendar year that the Bulldogs (10-2, 7-1) and Broncos (10-2, 7-1) will meet and the second straight year they will play for the conference title on Boise's home turf.

The teams faced off in the 2017 regular-season finale, and then a week later in the conference title game. They played each other again three weeks ago in the regular season.

"It goes for both teams so I'm not sure it's much of an advantage. ... Going there is not new to us so you know what to expect and we know what the challenge is," Tedford said.

There could be a lot riding on the outcome depending on what happens earlier Saturday. The winner would be in line for the Group of Five bid to a major New Year's bowl game if UCF stumbles in the American championship game against Memphis. It likely would mean a spot in the Fiesta Bowl. If UCF wins, the likely destination for the winner is a bowl game in Las Vegas.

Fresno State lost its chance to host the conference title game this year when it stumbled in a 24-17 loss to the Broncos three weeks ago in Boise. Fresno State led 17-3 early in the third quarter, only to watch Boise State score the final 21 points.

Despite the teams' familiarity with one another, don't expect major changes in the game plans for either.

"I think if you go too far out of what you've been doing, you're probably overthinking it a little bit," Boise State coach Bryan Harsin said.

Here are other things to watch for:

ALEXANDER THE GREAT: Boise State running back Alexander Mattison had a major surge to close the regular season and it began with his performance against Fresno State. Mattison rushed for 144 yards against the Bulldogs. He followed up with 145 against New Mexico and capped the three-game run with 200 yards and three touchdowns last week against Utah State. Mattison is the sixth running back at Boise State since 2001 to post consecutive 1,000-yard rushing seasons.

"Saying you're going to stop Mattison is a lot easier said than done," Tedford said. "He's a big physical guy and they do a nice job with it. It's a challenge, no doubt about it."

STRENGTH VS. STRENGTH: The Bulldogs finished the regular season with the No. 1 scoring defense and total defense in the Mountain West, led by MWC defensive player of the year Jeff Allison. But the 24 points by to the Broncos were the second-most allowed all season by the Bulldogs. Boise State also finished with 448 total yards, a season-high allowed by Fresno State. During their seven-game win streak, the Broncos have gained less than 448 yards of offensive only once.

BETTER MARCUS: Fresno State QB Marcus McMaryion struggled in the conference title game last year, but played well when the teams met three weeks ago. McMaryion was 16 of 34 and threw an interception in the 2017 title game, but in the regular-season meeting this year he passed for 283 yards and a touchdown. The problem earlier this season was Fresno State's inability to sustain drives, especially in the second half. Fresno State's offense failed to convert a third-down attempt in the second half and was shut out after scoring on the opening drive of the third quarter. That's not all on McMaryion but he must be even better this time around.