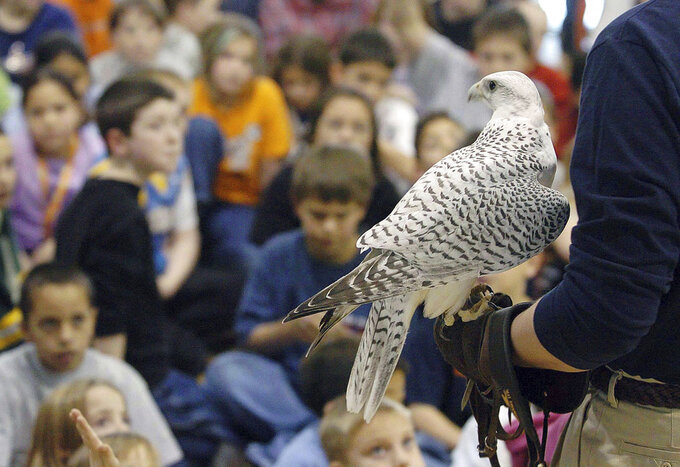 In this photo taken in 2004, Aurora, a rare white gyrfalcon and Air Force Academy mascot, visits Pinon Valley Elementary School in Colorado Springs, Colo., on the arm of an academy cadet in the falconry program. Aurora, injured at West Point during an apparent prank before the annual rivalry game between the two service academies Saturday, Nov. 3, 2018, is back home and showing signs of improvement. (Jerilee Bennett/The Gazette via AP)

AIR FORCE ACADEMY, Colo. (AP) — An Air Force falcon named Aurora is resting and the school remains optimistic for a recovery after she was injured at West Point during a prank before the annual rivalry football game.

The 22-year-old bird keeps showing signs of improvement. Academy spokesman Meade Warthen said Monday that they "expect her to recover." She flew around her pen Sunday.

Army officials at West Point apologized for the injuries to the falcon and promised a full investigation.

Aurora is the Academy's official and oldest mascot. She doesn't fly at football games, but attends most away games to greet fans.