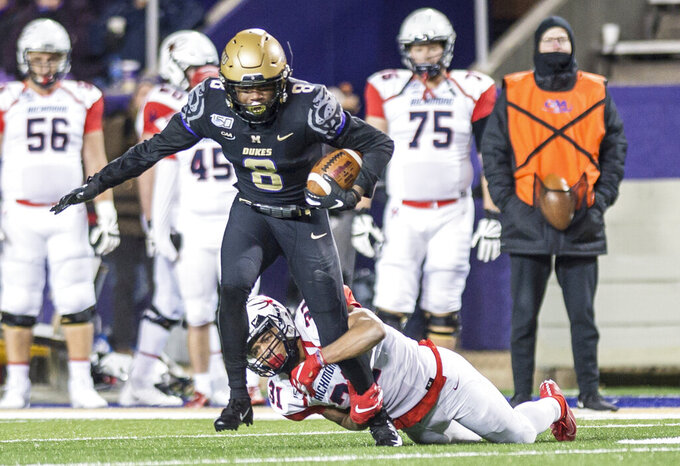 James Madison safety Wayne Davis (8) tries to escape from Richmond running back Savon Smith (31) after making an interception during the second half of an NCAA college football game in Harrisonburg, Va, Saturday, Nov. 16, 2019. (Daniel Lin/Daily News-Record via AP)

James Madison (10-1, 7-0), No. 2 in the FCS coaches’ poll, moved up to the nation’s second-longest active winning streak by beating Richmond for the fourth straight time.

DiNucci was 11 of 13 for 179 yards and carried it 10 times for 39 more. Brandon Polk opened the scoring with an 80-yard catch-and-run and Percy Agyei-Obese capped a 17-point burst with a 3-yard score before Richmond got on the board midway through the second quarter.

Agyei-Obese and Eric Kirlew also rushed for a touchdown for James Madison. Ethan Ratke made two field goals to break his own school record with 18 on the season.

Joe Mancuso passed for 204 yards with an interception for Richmond (5-6, 4-3), which turned it over four times. Jake Larson kicked field goals of 23 and 40 yards.

40 minutes ago
By Ralph D. Russo an hour ago
3 hrs ago
By Stephen Hawkins 4 hrs ago
5 hrs ago