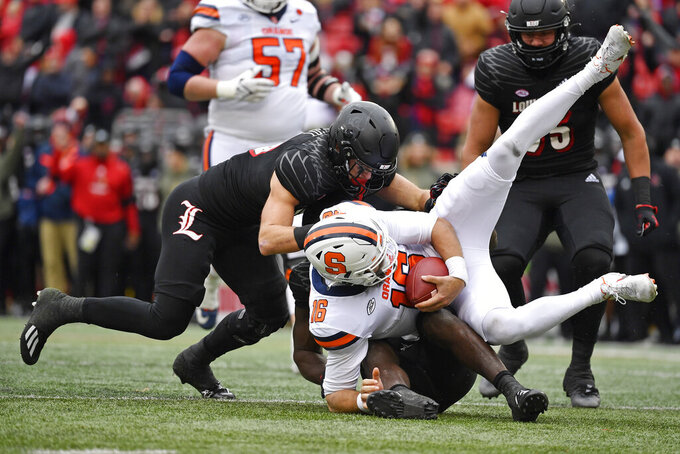 Louisville will be looking to string together football victories for the first time in months when the Cardinals host Duke.

The struggling Blue Devils are looking for any way to salvage positives in their final two games of the season.

Duke (3-7, 0-6 Atlantic Coast Conference) hasn’t won since beating Kansas in the Blue Devils' final nonconference game on Sept. 25. Only one of their ACC losses – 31-27 at home to Georgia Tech on Oct. 9 – has been in doubt in the final minutes. Four subsequent defeats have come by an average margin of 35.5 points, most recently 48-17 at Virginia Tech.

Duke’s challenge on Thursday night in Durham, North Carolina, is stopping the Cardinals (5-5, 3-4), who look to become bowl eligible for the second time in three years.

That window of opportunity appeared to be closing a week ago before opening back up with a 41-3 shellacking of Syracuse as quarterback Malik Cunningham threw for four of his five touchdowns.

While it was just Louisville’s second win in six games, it was arguably the biggest as it addressed many problems that contributed to its skid.

The Cardinals bounced back big by scoring on five of their first six possessions to lead 35-3 by halftime. Their defense held the nation’s No. 2 rusher, Sean Tucker, below 100 yards and quarterback Garrett Shrader to just 46 passing.

“We’ve been on the cusp of a lot of these games and our guys continue to fight and strive to get on top and win these games,” Louisville coach Scott Satterfield said this week.

“To finally put one together with a complete team win, that’s encouraging. Hopefully, our guys are fired up to know that, hey, this is the way we can play no matter who we’re playing.”

Louisville has won both meetings against Duke, including 24-14 in October 2016.

Some other things to watch as Louisville visits Duke in prime time:

The Blue Devils didn’t have top quarterback Gunnar Holmberg for Virginia Tech after he exited the loss to Pittsburgh early due to an upper-body injury. Cutcliffe said Monday that Holmberg felt good in pregame warmups, but was held out because of concerns about the banged-up QB’s ability to protect himself from hits.

Duke turned to Riley Leonard as the program’s first true freshman to start at the position since Thad Lewis in September 2006, while freshman Jordan Moore also saw work. Cutcliffe said Holmberg started the week by practicing with the other QBs and that the team would have to see how he progresses.

Louisville freshman receiver Ahmari Huggins-Bruce shared ACC rookie honors this week after catching a career-high six passes for 54 yards and two touchdown passes in the rout. Meanwhile, Tyler Harrell continues to pile up chunk-play receptions. He had three catches for 59 yards and a TD against Syracuse and ranks second on the team with 407 yards. He’s averaging 31 yards per catch.

Duke’s offense must get production from running back Mataeo Durant to be successful. That didn’t happen against Virginia Tech. With Holmberg out, the Hokies focused on taking Durant away and making the young quarterbacks beat them. Durant finished with 33 yards on 10 carries.

“He’s got to be a part of our offense for us to be successful,” Cutcliffe said, adding, “Certainly your biggest weapon, you can’t ever let be taken away without them paying a price somewhere else.”

Louisville made five sacks against Syracuse and has recorded at three in four of the past five past contests. The Cardinals have 30 this season, their most since 2016. Linebacker Yasir Abdullah ranks second in the ACC with nine, the program’s history total since Devonte Fields in 2015.

Satterfield is a native of Hillsborough, North Carolina, and eagerly anticipates making his first appearance at Wallace Wade Stadium since attending a football camp there as a child.