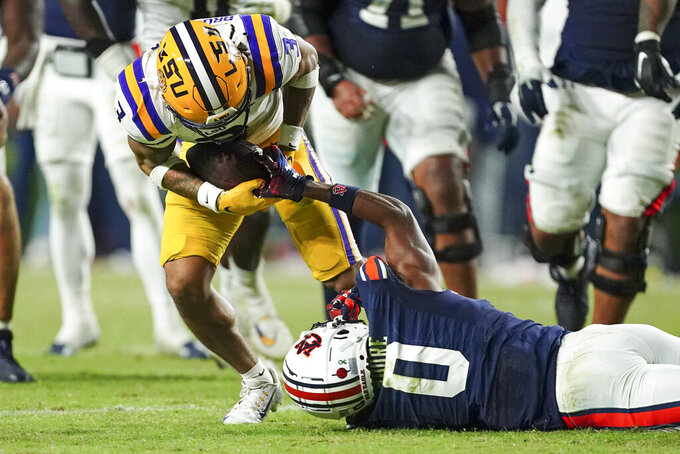 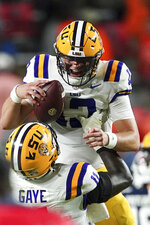 AUBURN, Ala. (AP) — John Emery Jr. rushed for a tackle-breaking, 20-yard touchdown and Greg Brooks Jr. had a late interception to help LSU complete a 21-17, come-from-behind win over Auburn on Saturday night.

LSU (4-1, 2-0 Southeastern Conference) fell behind 17-0 before Jayden Daniels brought the visiting Tigers back with help from Auburn blunders. It was the fourth straight win for Brian Kelly and LSU.

“We just found a way to win the game,” said Kelly, LSU's first-year coach. "Was that our best performance? I hope not. But it was gutty, it was gritty, and I was proud of our guys the way they hung in there.

“As I told our guys, that’s a culture win, that’s a program win, where you’re doing things the right way to win a game like that.”

And Auburn (3-2, 1-1) helped out by doing plenty of things wrong. Auburn blew its second straight double-digit lead, but was bailed out by Missouri's goal line fumble in overtime last week.

There was no bailout this time.

Auburn coach Bryan Harsin, who has been under fire since a late swoon last season, was asked how confident he was that he’d keep his job to the end of Year 2.

“That’s my job, everyday, is to show up and make sure that I’m prepared and we get this football team prepared and that doesn’t change, whatsoever,” Harsin said. “And I told the team that. That’s how I approach every job I’ve had. This will be no different.”

LSU came up with the last big play.

Brooks ripped the ball away from LSU transfer Koy Moore after a catch with 2:18 left in Auburn's fourth straight failure to capitalize on a trip across midfield.

“They ran (that play) like six times so I knew it was coming,” Brooks said.

Backup quarterback Garrett Nussmeier, who came in after Daniels banged knees with an Auburn player in the fourth, was able to run out the clock.

Daniels only passed for 80 yards but also ran for 59 and a 1-yard touchdown with 15 seconds left before halftime. Kelly said Daniels could have kept playing and should be fine against No. 8 Tennessee, but it was his call not to send his dual-threat quarterback back out there.

Tailback Josh Williams ran for 68 yards in his first start.

Auburn's Robby Ashford passed for 337 yards and two touchdowns in his second start, including an early 53-yarder to Ja'Varrius Johnson and an 18-yarder to Camden Brown. But he lost one of his four fumbles and threw the late interception.

Emery gave LSU its first lead late in the third quarter, breaking one tackle attempt in the backfield and having three other defenders get a hand on him.

Auburn then set up first-and-goal from the 5 before disaster struck early in the fourth. First, Ashford dropped the ball and lost 5 yards, then Moore was intercepted by Harold Perkins Jr. on a trick play.

LSU whittled a 17-0 deficit down to 17-14 by halftime, a week after Auburn led Missouri 14-0 after the first quarter.

Jay Ward recovered a fumble on a strip sack forced by BJ Ojulari and returned it 17 yards for a touchdown. Then Auburn had a missed field goal and called two timeouts on LSU's final drive of the half, keeping it alive with a personal foul on third-and-long.

Daniels kept it for a 1-yard score with 15 seconds left.

LSU: Daniels & Co. continue to win, and he continues to play interception-free ball. The Tigers could be looking at a Top 25 ranking after receiving some votes. Auburn: Has scored just six second-half points in the last three games, raising the heat on coach Bryan Harsin. A failed fourth-and-10 from LSU's 37 set up the go-ahead touchdown in the third quarter.

LSU defensive back Sevyn Banks was strapped onto a stretcher and taken to a local hospital after a scary scene on the opening kickoff. LSU posted on Twitter that he underwent a series of tests at a local hospital and was released to return to the stadium. Kelly said it was a neck injury and “we're very encouraged.”

“There's no words to describe how we felt when he was laying there on the field,” Williams said.

Auburn defensive end Eku Leota was injured in the first quarter and returned to the sideline with his right arm in a sling.