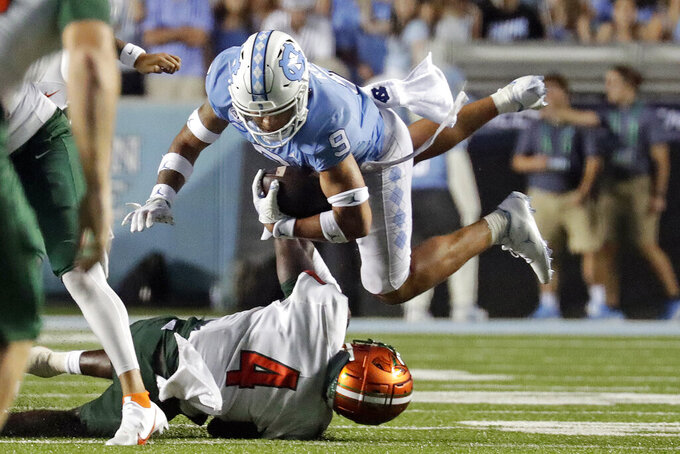 North Carolina's Cam'Ron Kelly (9) is upended by Florida A&M's Kym'Mani King (4) as he runs the ball upfield during the second half of an NCAA college football game in Chapel Hill, N.C., Saturday, Aug. 27, 2022. (AP Photo/Chris Seward)

“It was fun out there,” Maye said. “We’ve got a lot of talent. We just have to put it together.”

Florida A&M arrived with a roster reduced by nearly two dozen players because of unresolved eligibility issues. The list of those absent included linebacker Isaiah Land, who led the Football Championship Subdivision in sacks last year.

“I thought it was my duty to leave this up to our guys,” Rattlers coach Willie Simmons said of Friday’s uncertainty. “They initially decided not to play the game, and after some internal discussions, they decided to play the game. So we got on the plane with the mindset that we were going to play. … I’m extremely proud of how they came together because most teams would have used excuses and come out here, laid an egg, and (instead we) played a game that I’m very proud of.”

“He thinks this is what he’s supposed to be doing,” North Carolina coach Mack Brown said. “One of the best first games I’ve ever seen.”

“That’s kind of how the game worked out,” Maye said of the records.

North Carolina running back Omarion Hampton scored on touchdown runs of 2 and 25 yards in his debut. He finished with 101 rushing yards on 14 carries.

Florida A&M quarterback Jeremy Moussa, a graduate transfer from Vanderbilt, threw for two touchdowns. He completed 28 of 38 passes for 279 yards with an interception.

“He’s no longer a secret,” Simmons said of the arrival of Moussa.

The Rattlers were within 21-14 until Downs’ 2-yard touchdown catch with 5 seconds left in the first half.

Earlier, Maye connected with Kamari Morales for a 19-yard touchdown pass for the game’s first points. It came one play after Maye dodged defenders on the way to a 42-yard run.

The Rattlers responded by driving 75 yards in eight plays and scoring on Moussa’s 17-yard pass to AJ Davis.

On the ensuing possession, Maye hooked up with Bryson Nesbit for a 23-yard touchdown. His next scoring play came on a fourth-and-4 pass to Gavin Blackwell.

Veteran North Carolina coach Mack Brown had never defeated a team from Tallahassee, Florida, until this result. As coach of the Tar Heels, Brown, a Florida State alum, had been 0-8 all-time against Florida State.

This was the first football meeting between Florida A&M and North Carolina.

“It was a perfect opening game for us,” Brown said.

Brown, who turned 71 on Saturday, has 266 career coaching victories.

Florida A&M: The Rattlers couldn’t sustain their good stretches and that could have come in part because of limited players available. They suited up about 50 players. They won’t play another Football Bowl Subdivision team this year, so repeating the success of a nine-win season from last year appears possible.

North Carolina: The Tar Heels will be happy with what they saw from members of their young offensive backfield. They won’t be so fond of the defense giving up 279 passing yards, with 273 of those coming across the first three quarters.