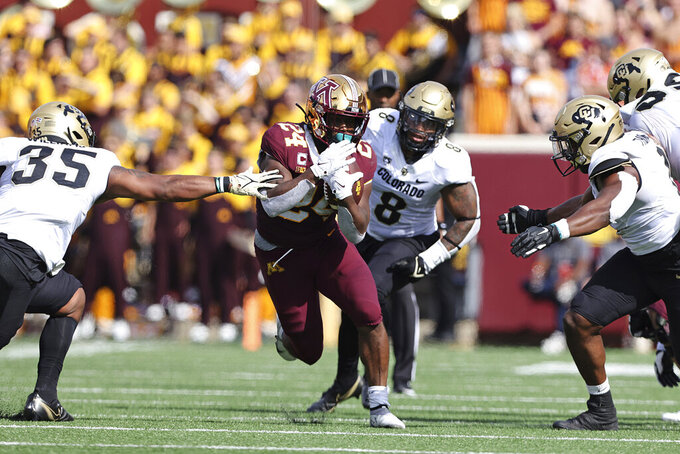 Minnesota running back Mohamed Ibrahim (24) carries the ball against Colorado during the first half of an NCAA college football game, Saturday, Sept. 17, 2022, in Minneapolis. (AP Photo/Stacy Bengs)

Line: Minnesota by 3 according to FanDuel Sportsbook.

Michigan State is hoping to bounce back following its first loss of the season at Washington. This starts a key stretch for the Spartans who have games with Maryland, Ohio State, Wisconsin and Michigan in October. Minnesota is the current frontrunner to win the Big Ten West Division and will face its first challenge of the season after three straight blowout wins. Dating to last year, the Gophers have won six straight games and are looking to start 4-0 for the first time since 2019.

Minnesota: TE Brevyn Spann-Ford has developed into a reliable blocker and receiver for the Gophers, now in his fifth year in the program. With Chris Autman-Bell out, the Minnesota native is the leading receiver left with eight catches for 127 yards and a touchdown.

Michigan State: QB Payton Thorne hopes to build off his performance against Washington. The junior quarterback completed a career-high 30 passes for 323 yards and three touchdowns despite missing injured Spartans’ star WR Jayden Reed. Thorne ranks third in the Big Ten and 23rd in the FBS with seven passing touchdowns.

This is Minnesota’s first trip to East Lansing in nine years. The Spartans have won five straight games in the series, last losing in Minneapolis in 2009. Minnesota’s most recent road win at Michigan State was in 2006. ... Michigan State has already forced eight fumbles and has recovered six of them, both best in the FBS. … The Gophers are second in the FBS in total defense with an average of 170.3 yards per game allowed and have given up a total of just 17 points in three games. They have played 14 straight games, a span of 56 quarters, without allowing more than 10 points in any quarter. ... Ibrahim, who is tied for second in the FBS with 464 rushing yards, has a streak of 12 straight games with 100-plus rushing yards. ... Michigan State has not allowed a 100-yard rusher in its last 16 games.