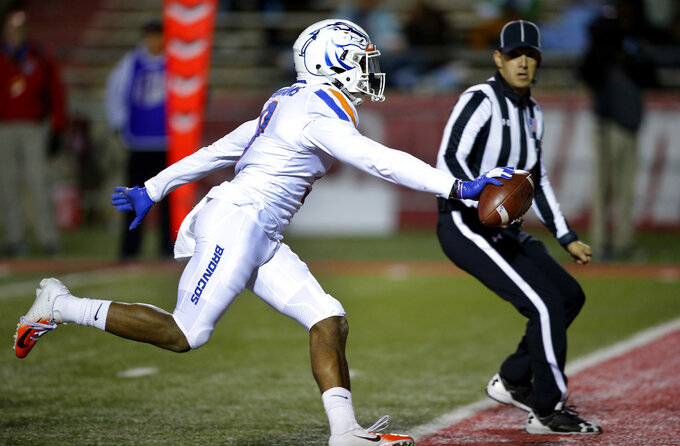 ALBUQUERQUE, N.M. (AP) — Any talk of a trap game did not get much attention from No. 23 Boise State in practice this week.

The Broncos went out and played against a struggling New Mexico team as if a huge game was not looming on their schedule next week against No. 14 Utah State.

"This week, it was all about New Mexico," Broncos coach Bryan Harsin said. "We can control how we play the game and we did."

"It felt good to come out here and do what needed to get done," Modster said. "Our whole mentality was to get in and get out."

Modster finished with a career-high nine catches for 129 yards. Broncos quarterback Brett Rypien was an efficient 17 for 27 for 222 yards and the three scores, while running back Alexander Mattison added 145 yards and a touchdown.

The Broncos came into the game looking to break Modster open, Rypien said

"He got some looks but at other times, it depended on what they were giving us," he said. "He just did a good job of winning the one on ones. I think our other guys are going to be hungry now that Sean had three touchdowns. I'm sure there are some other guys in that room who are going to want some red zone action as well."

Boise State limited the Lobos to 262 total yards and one touchdown, with the other touchdown coming on a punt return.

"I thought our defense did a fantastic job," Harsin said. "They did move the ball because they're good and they have multiple ways they can attack you. We can tackle better. But our defense holding them to seven points is hard to do."

The Broncos took control of the game quickly, going 65 yards in 2:22, with Rypien hitting Modster from 15 yards out. By the end of the first quarter, the lead was up to 14-0, and Boise State led 24-7 at halftime.

"We had a hard time stopping them," New Mexico coach Bob Davie said. "Although we did fight, but the three turnovers were big."

The Broncos' sixth straight win keeps them on track for a shot at the conference's Mountain Division championship and a berth in the Mountain West title game on Dec. 1.

Marcus Hayes' 86-yard, fourth-quarter punt return for a touchdown was New Mexico's first since 2002, a total of 208 games. It was the second-longest drought in college football behind only Rice.

Former Boise State running back Jack Darrel Fields Jr., 25, was shot and killed Thursday evening following an altercation with a Richmond County (Ga.) Sheriff's Office deputy. He played with some of the older Broncos.

New Mexico running back Daevon Vigilant, who had 23 yards and a touchdown, was elected to the student-body senate this week.

The win leaves Boise State well-positioned to continue its climb in poll, especially after No. 22 Boston College and No. 20 Kentucky took big falls last week.

Boise State: Next plays No. 14 Utah State (which faces Colorado State on Saturday) on Nov. 24. The winner of that game will advance to the conference championship against either Fresno State or San Diego State.

New Mexico: Finishes its season at home against Wyoming on Nov. 24. The Cowboys enter its Nov. 17 home game against Air Force having won two straight games.