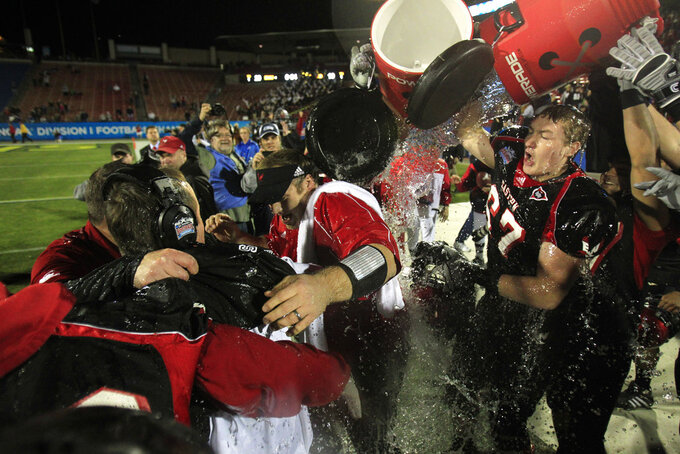 The Big Sky Conference champion Eagles (12-2) are finally back in the title game and aren't surprised that on Saturday they will have to face North Dakota State (15-0), which is going for its record seventh FCS championship since then.

"In the offseason thinking about getting to this point, you kind of just automatically picture it being NDSU just because it's so normal for them to be here," Eastern Washington linebacker Ketner Kupp said.

Second-year Eastern Washington coach Aaron Best knows what his team is up against.

"This is not a business trip. This is not a vacation. This is a game against North Dakota State, the No. 1 team in the nation, and we're not OK to be here," said Best, the team's offensive coordinator during that 2010 championship season. "We will give them their best shot. They will give us our best shot."

North Dakota State won five titles in a row after the Eagles won their only championship 20-19 over Delaware, overcoming a 19-0 deficit after halftime in the first FCS game played in the pro soccer stadium about a half-hour north of downtown Dallas.

The Missouri Valley Conference champion Bison only missed a January trip to Frisco two years ago, but returned last season and matched the six FCS (formerly Division I-AA) titles won by Georgia Southern before it moved to the FBS level.

Like five years ago in Craig Bohl's final game before he became Wyoming's coach, the Bison will try to win a championship in Chris Klieman's finale. Klieman (68-6), who will be Kansas State's new coach, is going for his fourth FCS title as a head coach to match the record four won by Jim Tressel at Youngstown State before he later won a national title at Ohio State.

"It doesn't feel any different right now to be honest with you, simply because my total focus has been on preparing, preparing, preparing for Eastern Washington. And no different than last year or three years before that or however many years we've been here," Klieman said. "Whether it's my last game here or not, to me, is irrelevant. It's just the time that you have with these seniors."

FCS All-America quarterback Easton Stick is 48-3 as the NDSU starter, matching Brock Jensen for the most wins in school history. Stick was the starter for the 2017 title team and will try to join Jensen and Carson Wentz, the NDSU starter before Stick, with multiple championships. Stick has set NDSU career records with 10,897 total yards, 86 touchdowns passing and 124 total TDs. He needs 104 yards passing to break Jenson's career record of 8,598 set from 2010-13.

"I talked to Carson a little bit earlier today," Stick said Friday. "He's been obviously a really good friend to me since I stepped on campus here and has played a big role in our program's success and my success. He's continued to be a really good friend."

On the way to its 2010 championship, Eastern Washington had an overtime victory at home over North Dakota State in the quarterfinal round of the playoffs. There have been only two other meetings between the two teams, both regular-season games won by the Bison. NDSU won a 50-44 overtime game at home in 2016 before a 40-13 win at Eastern Washington in 2017.

Kupp, Eastern Washington's leading tackler with 104 stops (57 solo), is the younger brother of Los Angeles Rams receiver Cooper Kupp, a standout at Eastern Washington from 2013-16. Cooper, who never got play in a title game, will be there Saturday to support his brother and alma mater.

"Guys keep asking me if I give him a hard time," Ketner Kupp said. "No, he's just really excited that we got here and he knows the work we put in and how hard it is to get here."

The NCAA announced Friday a five-year extension to keep the FCS championship game in Frisco through the 2024 season, with an option for at least one more year after that. The Southland Conference serves as the game's host at the home stadium of MLS team FC Dallas, and the site of the National Soccer Hall of Fame.