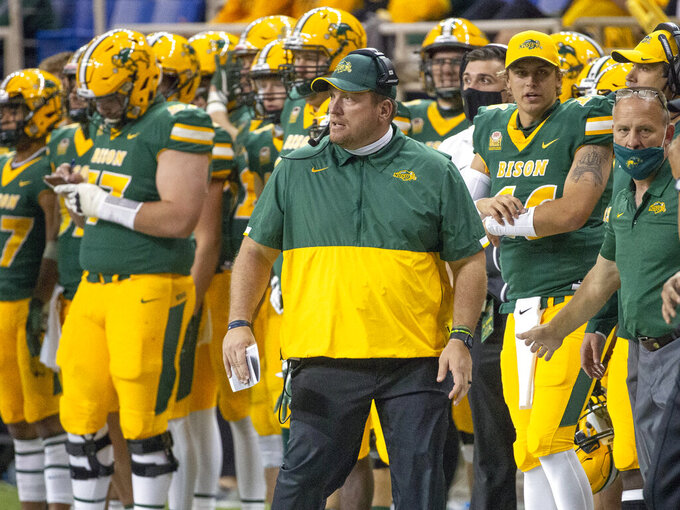 FRISCO, Texas (AP) — Montana State advanced to its first championship game since 1984 after consecutive playoff wins over the two teams that played for the FCS title less than eight months ago.

Now the Bobcats face North Dakota State, with a record eight Football Championship Subdivision titles the previous 10 seasons and never a loss when making the trip from Fargo to Frisco, Texas. The Bison also ended Montana State’s last two playoff appearances, both by lopsided margins at the end of the 2018 and 2019 seasons.

“To have NDSU as our opponent … I think our guys looked at this opportunity when it was laid out with the brackets,” said first-year Montana State head coach Brent Vigen, an NDSU alumnus.

"We’d love to be the team that goes down there and beats them,” said NFL prospect and senior FCS All-America linebacker Troy Andersen, a starting quarterback earlier in his career.

The Bobcats (12-2) and Montana-born breakout freshman quarterback Tommy Mellott get their shot Saturday. The 12th FCS title game in a row at 20,500-seat Toyota Stadium is sold out. There was limited-capacity crowd of 7,840 because of COVID-19 last May at the MLS soccer stadium that is about 30 miles north of downtown Dallas.

North Dakota State (13-1) won five consecutive titles in North Texas from 2011-15, and three more from 2017-19 before missing the championship game in the pandemic-altered spring season. Title-winning quarterback Trey Lance opted out of the unusual schedule to prepare for the NFL draft, and was picked third overall by the San Francisco 49ers.

Like Vigen is trying to do now, North Dakota State's Matt Entz won the national title in his head coaching debut two seasons ago in the only 16-win season in any division since Yale in 1894.

“It’s much more difficult than I think people think,” Entz said Friday. “All of a sudden, you’re a lifelong assistant and you’re kind of looking at things through maybe different colored glasses and now to be the guy in the front of the room trying to ... sell the vision every day. There is a different set of demands.”

Montana State didn't even play the spring season after Vigen was hired from Wyoming in February, when Jeff Choate left to become co-defensive coordinator at Texas.

Entz was the Bison DC for four titles in five years before succeeeding Chris Klieman, who left to be Kansas State's head coach. Vigen was an NDSU grad assistant from 1998-2000 and on the staff until going with Craig Bohl in 2014 to Wyoming.

North Dakota State’s only loss was Nov. 6 at South Dakota State. Montana State beat the Jackrabbits in the FCS semifinals three weeks ago after eliminating defending champ Sam Houston State in the quarterfinal round.

Another title chance for the Bison comes with a familiar formula. They have a strong rushing game (273.6 yards per game, third among FCS teams) and a standout defense that allows an NCAA-low 11.2 points a game and is third in giving up only 259.7 total yards a game.

The three-week gap since the semifinals gave key players from both sides time to heal.

Isaiah Ifanse, who has a Montana State-record 1,539 yards rushing this season, missed the semifinal win over South Dakota State because of a knee injury. North Dakota State expects senior Christian Watson, their leading receiver and return threat who hasn't played since a hamstring injury in practice before the playoffs, to return. Watson has four receiving TDs of at least 65 yards.

“This is a really big accomplishment for me to be in that category of some of the great quarterbacks that have played before,” Miller said of a list that includes Carson Wentz, Easton Stick and Lance.

Mellott didn’t take over as Montana State’s top QB until the playoffs, and has accounted for 11 touchdowns (six rushing, four passing, one receiving) in his three starts, all wins by at least two touchdowns.

North Dakota State also won in five of its seven NCAA Division II title game appearances between 1981-90. Montana State won that 1984 title when FCS was still referred to as NCAA Division I-AA. The Bobcats were the 1976 Division II champs — they beat NDSU twice that year, the second time in Fargo in the semifinals — and finished the 1956 NAIA title game in a scoreless tie.