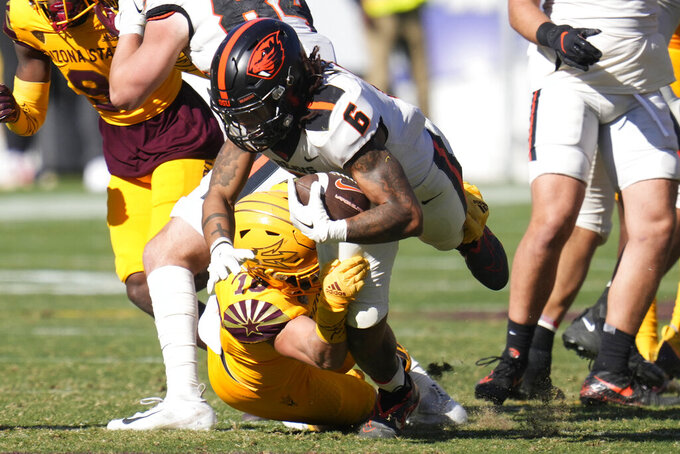 But he was familiar with the passion surrounding a game that was first played in 1894. And Nix will be in the middle of it all on Saturday when the 10th-ranked Ducks face the No. 22-ranked Beavers for the 126th time with major postseason implications on the line.

“I’ve been able to watch it a lot in the past,” Nix, a three-year starter at Auburn before transferring to Oregon, said of the rivalry. “I know it’s going to be a hostile environment.”

Nix does not figure to be close to 100% after sustaining an ankle injury late in the fourth quarter of a 37-34 home loss Nov. 12 to Washington. That loss derailed Oregon’s College Football Playoff aspirations. There was doubt up until last week's game time as to whether Nix would even play against then-No. 10 Utah.

If Nix receives an invite to next month's Heisman Trophy presentation, his gritty performance in a 20-17 win over the Utes will be a major reason for his inclusion.

When healthy, Nix is among the top dual-threat quarterbacks in the nation. He has thrown for 3,061 yards and 25 touchdowns with six interceptions, and Nix’s completion percentage of 72.2 leads the nation. He’s also run for 509 yards and 14 touchdowns, the most of any QB in the country.

Nix had limited mobility against Utah and was not a running threat. It's likely to be a similar situation against the Beavers.

“I did it for my teammates,” Nix said of playing through the injury. “I figured if they can do it, I can do it.”

If Oregon wins, it would be in the Pac-12 title game for a fourth straight year. There is also a scenario where the Ducks could back into the conference championship game, but that’s not the route they want to take.

“What we can control is how we perform against a really good Oregon State team,” first-year Oregon coach Dan Lanning said.

A higher-profile bowl game is in the equation with a win.

“Obviously, we wanna get these guys,” Oregon State redshirt freshman quarterback Ben Gulbranson said. “They’re a great team over there and we’re looking forward to a great game.”

Gulbranson is 5-1 as a starter since replacing junior Chance Nolan, who sustained a neck strain injury in the first quarter of a 42-16 loss in October at Utah. Nolan hasn’t played since and Gulbranson tightened his grip on the starting job. He’s completed 63.6% of his passes for 1,230 yards and eight touchdowns with three interceptions, and has two rushing touchdowns.

A week after Washington quarterback Michael Penix Jr. torched Oregon for 408 yards and two touchdowns, the Ducks’ defense was much improved in the Utah game. Utah’s Cameron Rising was limited to 170 yards passing with zero touchdowns and three interceptions. Oregon's Bennett Williams had 14 tackles and two picks, and was named Pac-12 defensive player of the week.

Oregon State freshman running back Damien Martinez has reeled off five consecutive 100-yard rushing games. The last player to accomplish that feat for the Beavers was Steven Jackson in 2003.

Oregon State has utilized a three-back rotation for most of the season, but Martinez has received the majority of the carries in recent games. He’s rushed for 867 yards and seven touchdowns, and is averaging 6.1 yards per carry.

Oregon State has won 10 of its last 11 games at Reser Stadium. The last time the rivalry game was played in Corvallis in 2020, the Beavers prevailed 41-38. Oregon State is ranked third the Pac-12 in scoring defense and has given up 12.6 points per game at home.