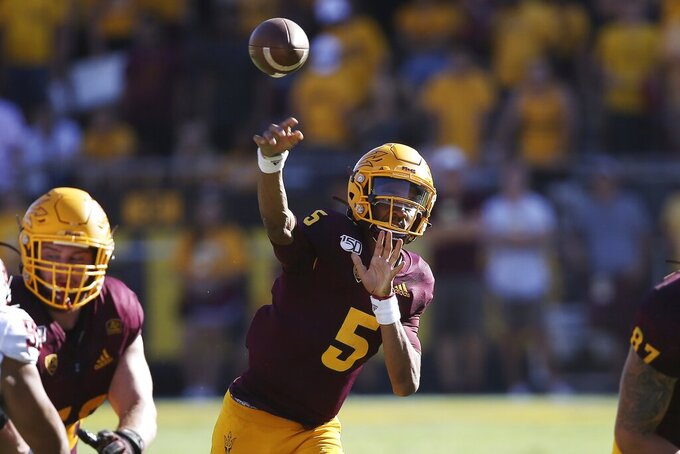 A victory will allow either No. 13 Utah or No. 17 Arizona State to claim a valuable tiebreaker and get a leg up in a heated Pac-12 South title chase.

Utah's backfield vs. Arizona State's run defense. The Utes boast the Pac-12's top rushing offense, churning out 228.8 yards per game. The Sun Devils are No. 2 in the league in rush defense, allowing just 91.6 yards on the ground per game.

Arizona State: QB Jayden Daniels and RB Eno Benjamin. Daniels has tallied three 300-yard passing games in his first six career starts. He ranks third in the Pac-12 in passing yardage (1,610). Benjamin has tallied 529 yards on the ground and has scored a touchdown in eight consecutive games.

Utah: RB Zack Moss and QB Tyler Huntley. Moss enters the game needing just 55 yards to become the Utes' career rushing leader. He currently leads the Pac-12 with 7.6 yards per carry. Huntley is making Moss feel even more dangerous with his accuracy and efficiency. He currently ranks third in the FBS in completion percentage (.756) and fifth in passing efficiency (187.6).

Utah is one of just two teams in the FBS this season that has held all its opponents to under 100 yards rushing each game. . Arizona State has scored double-digit points in 125 consecutive games. It is the longest active streak in the FBS matching the modern-era record set by Louisiana Tech from 2008-18. . The Utes are one of three FBS teams that have not thrown an interception yet. Tyler Huntley has thrown 133 consecutive passes without an interception dating to last season against Arizona State. . Utah's defense has allowed just 27 second-half points through six games. . Kyle Williams has at least one pass reception in 34 consecutive games, the sixth-longest streak in Arizona State history.