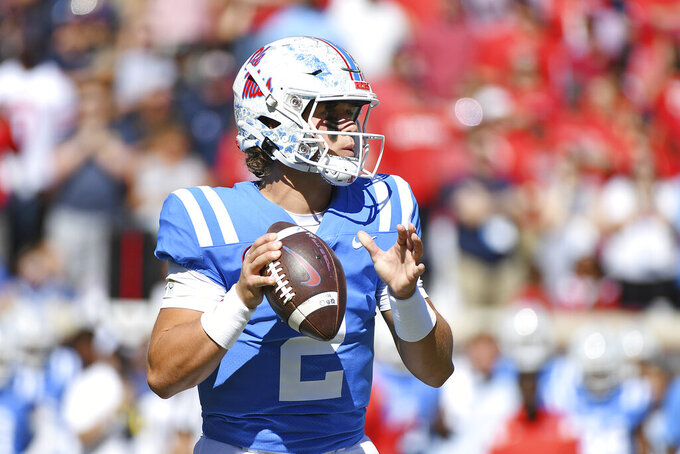 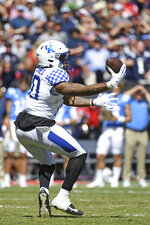 OXFORD, Miss. (AP) — Lane Kiffin changed his opinion of his defense after No. 14 Mississippi forced two turnovers in the final three minutes to preserve a 22-19 win over No. 7 Kentucky on Saturday.

“Our guys really showed up, especially in the fourth quarter, getting those two turnovers to win it,” Kiffin said. “I had told them at halftime, I didn’t think they were very good. At the end, our team found a way to come through.”

Even better, Austin Keys and Jared Ivey each created those takeaways inside the red zone. They forced Wildcats quarterback Will Levis to fumble on consecutive possessions with AJ Finley and Tavius Robinson recovering each, respectively.

Both plays stopped potential game-winning drives inside the 20 to preserve the victory for the Rebels (5-0, 1-0 Southeastern Conference).

Jonathan Cruz's go-ahead, 26-yard field goal late in the third quarter put Ole Miss up 22-19 and set the stage for the tense, frantic finish. The Rebels' defense first forced the Wildcats to turn over the ball over on downs early in the fourth before creating the turnovers to seal the win.

“We certainly had our opportunities,” Kentucky coach Mark Stoops said. “It came down with two opportunities late in the red zone. We came away with zero.”

Levis led Kentucky (4-0, 1-1) to the Ole Miss 18 before fumbling while diving for additional yardage. The Wildcats created a final opportunity on Levis 51-yard pass to Barion Brown to the 7. After a touchdown-nullifying illegal motion penalty, Levis fumbled on the next play on a sack by Ivey with 58 seconds remaining.

“I stayed on my feet, put a move on their tackle, got the bend (angle) and reached out to slap at the ball. After that, it was a blur,” Ivey said. “Coach (Kiffin) said I missed four chances in the last game to make a play and it was about time for me to make one.”

Ole Miss running back Quinshon Judkins rushed 15 times for 106 yards, including a 48-yard touchdown that built a 14-0 first-quarter lead. Zach Evans added a 4-yard scoring run and Tavius Robinson was credited with a safety after an intentional grounding penalty by Kentucky for a 19-12 halftime lead.

Jaxson Dart was 15 of 29 passing for 213 yards as the Rebels finished with 399 yards of total offense. Troy Brown and Finley had a game-high nine tackles apiece and the Rebels had nine stops for loss.

Levis tossed TD passes of 5 and 17 yards, respectively, to Tayvion Robinson and Jordan Dingle. The QB completed 18 of 24 attempts but was sacked three times besides the two late fumbles.

Kentucky: The Wildcats failed on two extra points, a wide-left 39-yard field goal attempt in the first half and an illegal motion penalty that wiped out a potential game-winning TD pass in the final minute – and that was the difference in a close game. The win snapped an eight-game winning streak that spanned two seasons.

Mississippi: The Rebels survived a competition upgrade after blowing through a softer-than-expected September schedule. Ole Miss is 16-3 over two seasons and positioned itself to be the best team in the SEC other than top-ranked Georgia or No. 2 Alabama. The Rebels are 5-0 for the first time since 2014.

“There is more to go, but this is one I’m always going to remember,” Dart said. “Winning this early in the day means we are all going to have a great night tonight.”

NFL IN THE HOUSE

A total of 17 NFL personnel representing 12 teams were credentialed for the game, primarily to evaluate Levis, who is considered a potential first-round draft choice.

After missing September due to suspension, Kentucky's All-SEC running back Chris Rodriguez Jr. returned to the starting lineup. Rodriguez finished with 72 yards on 19 rushes with a fourth-and-2 conversion run during a third-quarter TD drive.

Despite a steady ascent, the No. 14 Rebels trailed 11 other ranked unbeaten teams. Defeating the No. 7 Wildcats boosted Ole Miss' prospects for a Top-10 slot. The Wildcats had a creditable road performance and figure to remain ranked despite the loss.

Kentucky: The Wildcats begin a two-week home stand with South Carolina on Saturday.