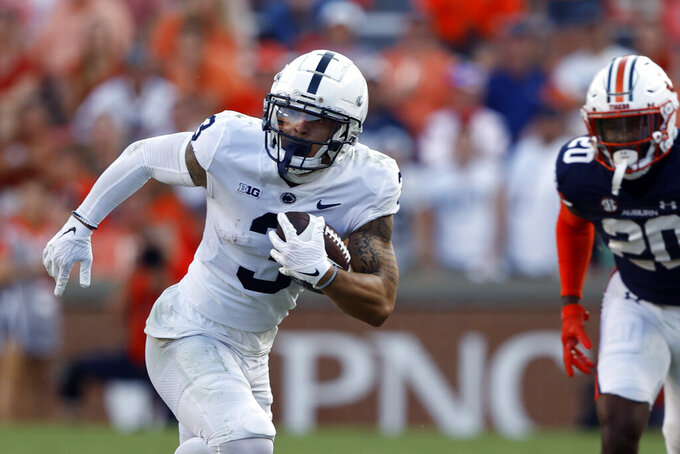 Penn State wide receiver Parker Washington (3) caries the ball against Auburn during the second half of an NCAA college football game, Saturday, Sept. 17, 2022, in Auburn, Ala. (AP Photo/Butch Dill)

Line: Penn State by 27 1/2, according to FanDuel Sportsbook.

Penn State opens a two-game homestand with a tune-up against a Mid-American Conference opponent before hosting Northwestern next week. The Nittany Lions want to stay sharp and healthy as a showdown at No. 4 Michigan looms on Oct. 15. Central Michigan is looking for its first win over an AP Top 25 team since 2016 and just its second in 25 years.

Central Michigan’s offensive line vs. Penn State’s front seven. The Chippewas plowed Bucknell for 287 rushing yards last week. They’ll need to control the clock with their run game to have a chance in this one. The Nittany Lions will be a much tougher test. Led by 320-pound tackle PJ Mustipher, Penn State has won the line of scrimmage every game so far and had 11 tackles for loss with six sacks at Auburn last week.

Central Michigan: QB Daniel Richardson is completing 58% of his passes and has thrown for 879 yards and seven touchdowns in his first year as the full-time starter. He’ll need to be better on third down, which is where Penn State’s defense excels. So far Richardson has turned just 10 of his 32 third-down passing attempts into first downs.

Penn State: RB Nick Singleton has shown how dangerous he is on the edge and in space, and the freshman could get more opportunities with Keyvone Lee banged up against Auburn and questionable.

Singleton’s 334 rushing yards are the most through the first three games of a season for Penn State since Larry Johnson’s 362 in 2002. … . Penn State will honor its 1982 national championship team at halftime. … The Chippewas are 6-27 all-time against the Big Ten. ... Richardson leads the MAC with 296 passing yards per game. ... Central Michigan beat then-No. 22 Oklahoma State in 2016 and then-No. 18 Michigan State in 1991.