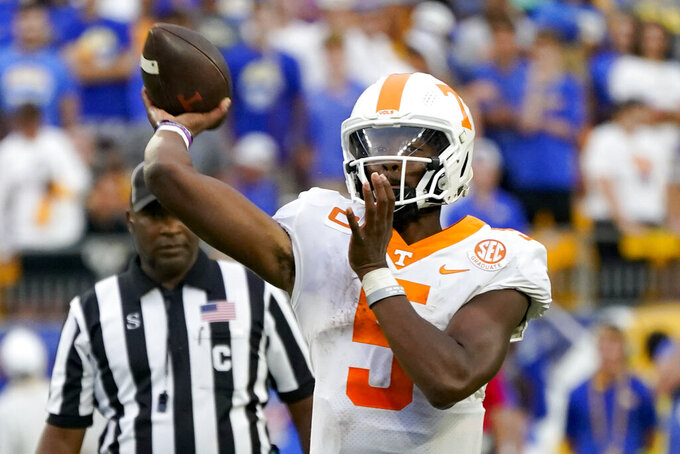 Tennessee quarterback Hendon Hooker throws a pass against Pittsburgh during the second half of an NCAA college football game Saturday, Sept. 10, 2022, in Pittsburgh. Tennessee won 34-27 in overtime. (AP Photo/Keith Srakocic)

Line: Tennessee by 47 1/2, according to FanDuel Sportsbook.

Tennessee has no room for a letdown at this stage of the season, not with a chance at taking a three-game win streak into the Volunteers' home showdown with Florida to kick off their Southeastern Conference schedule. A win would be the Vols' first 3-0 start since winning the first five games of 2016. After opening the season with an overtime win against St. Francis (Pa.), Akron was manhandled by Michigan State. Surviving another Power Five matchup healthy and positive is key as the Zips prepare to dive into their Mid-American Conference schedule.

Tennessee generated just 91 yards on the ground against Pitt. That part of the Vols' offense has to be more effective. Defensively, Tennessee didn’t get a sack against Ball State. The Vols had four against Pittsburgh, so getting to the Akron quarterback will be a priority.

Akron: WR Shocky Jacques-Louis is one of the Zips on offense with big-play capabilities. In two games, he has caught 11 passes for 153 yards and a touchdown.

Tennessee: WR Jalin Hyatt. He has caught 13 passes for 101 yards and a touchdown, which happened on the Vols' first offensive snap of the season.