No. 2 Ohio St. chases playoff spot against No. 10 Wisconsin 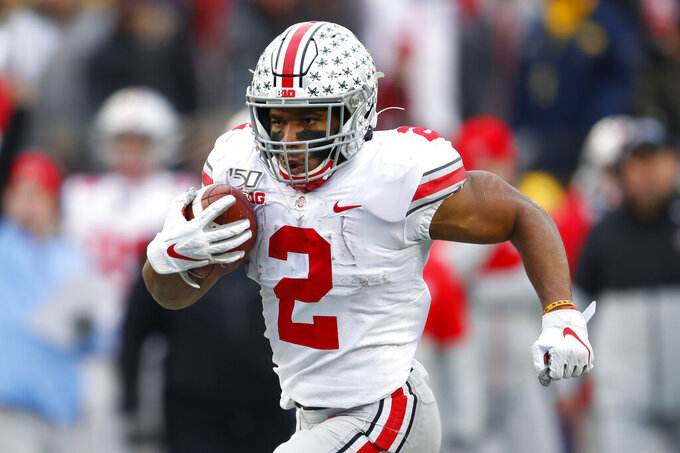 Ohio State running back J.K. Dobbins runs for a 33-yard touchdown against Michigan in the second half of an NCAA college football game in Ann Arbor, Mich., Saturday, Nov. 30, 2019. (AP Photo/Paul Sancya)

He expected to finish the Big Ten season with three straight top-10 games. He anticipated seeking an unprecedented third straight outright league crown. And he believed the Buckeyes would return to the College Football Playoff for the first time in three years.

Now, as No. 2 Ohio State prepares for Saturday's conference championship game, Day wants the Buckeyes to do follow the same script he's been preaching all season.

They have the top scoring offense in the nation (49.9 points) and a chance to become the first Big Ten team to make the playoffs since 2016.

And six weeks ago, Ohio State made it look easy by scoring the final 28 points in a 38-7 rout, wearing down the Badgers' stingy defense with a steady diet of quarterback Justin Fields and running back J.K. Dobbins while taking advantage of two second-half turnovers.

“It's been our goal, been on our board for a long time," Day said when asked about a potentially historic title run. “In a game like this, there's a lot of hype, a lot of hoopla when you come into the city. At the end of the day, it's going to come down to execution."

In October, Fields threw for two scores and ran for another and Dobbins rushed for 163 yards and and two touchdowns.

But the biggest problem was defensive end Chase Young, who had six tackles, four sacks and forced two game-changing fumbles.

“We've got to do a better job against him,”coach Paul Chryst said. “You've got to play good football. You've got to take advantage of opportunities when they come your way and you've got to create some of those."

And right now, even with Fields wearing a brace to protect his injured knee, it's the Buckeyes who have the most at stake.

Win and they're in, possibly with the top playoff seed and a chance to close out Day's first season as head coach just the way he dreamed it up.

“They've been highly motivated all year," Day said. “Now you put your head down, go as hard as you can to the finish line and win the game.”

CHIP ON HIS SHOULDER

Day wasn't happy with the Buckeyes' preseason rankings, which he perceived as a lack of respect.

They were ranked No. 5 in the preseason Top 25.

But the Big Ten writers picked them second in the Big Ten East, behind Michigan, the same writers who predicted Wisconsin would finish third in the West behind Nebraska and Iowa.

“A lot of people don’t give these kids enough credit in my opinion," Day said Tuesday. “A lot of people say, they’re very talented. If they’re that talented, why didn’t you pick us that way early in the season? These guys deserve, in my opinion, a lot of credit for what they’ve done this season. Retooled the whole defense, retooled an offensive line, had a quarterback who never had a college start walking into the season. Right now we’re undefeated", going to play for the whole thing."

The Badgers have lost six straight in the series and both of the previous meetings in the championship game.

So how important would it be for Wisconsin's program to get a win Saturday?

Young didn't post big numbers last week at Michigan, but Buckeyes coaches said he made a huge impact in the 56-27 victory.

The Wolverines double and triple-teamed the Big Ten Defensive Player of the Year most of the day and still was in quarterback Shea Patterson’s face plenty of times.

“His presence matters,” Day said. “Although sometimes maybe it doesn’t mean he’s getting sacks or (tackles for loss), when two or three guys get the attention of him, that opens up things for other guys.""