No. 23 Coastal Carolina puts ranking on line at JMU 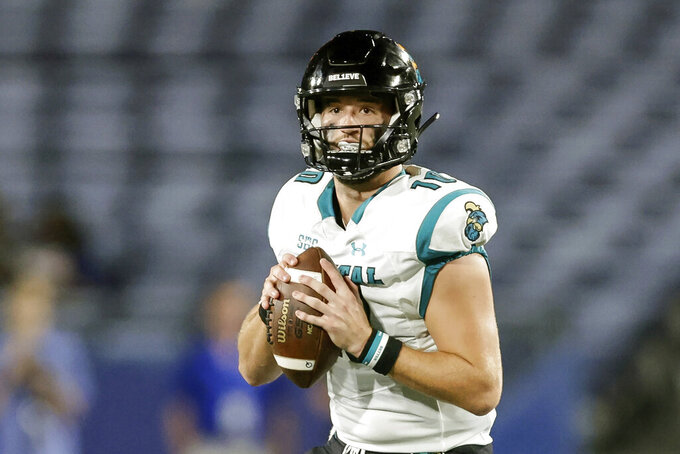 FILE - Coastal Carolina quarterback Grayson McCall (10) drops back to pass during the first half of an NCAA football game against Georgia State on Thursday, Sept. 22, 2022, in Atlanta. McCall will miss three to six weeks with a foot injury sustained a week ago in a win over Appalachian State. The school announced McCall's status Wednesday, Nov. 9. The injury's recovery timeline means that McCall's availability for a potential Sun Belt Conference championship game on Dec. 3 is in question. (AP Photo/Stew Milne, File)

Coastal Carolina will travel to Harrisonburg, Virginia, hoping to make its stay in the Top 25 last longer than that of its opponent, formerly ranked James Madison.

The Dukes (7-3, 5-2 Sun Belt) spent a week at No. 25 earlier this season, their first in the poll, but a 45-38 loss at Georgia Southern started a three-game losing streak. They have won two in a row since, including rallying from a 20-point deficit in a 42-40 victory against Georgia State.

The No. 23 Chanticleers (9-1, 6-1), whose game at Virginia was canceled last weekend after the slaying of three Cavaliers players, are trying to win 11 games for the third year in a row. But Coastal Carolina will likely be without quarterback Grayson McCall, who has thrown for 21 TDs with one interception, but missed last week with a foot injury and is unlikely to play this week. Jarrett Guest was 7 of 14 with two interceptions in a 26-23 win against Southern Miss.

Dukes coach Curt Cignetti has high regard for the Chanticleers.

“They have been in a lot of close games, but they win them,” he said.

Here are things to watch when Coastal Carolina plays at James Madison:

McCall is a two-time reigning Sun Belt player of the year who set an NCAA mark with a 207.6 passer efficiency rating last fall. McCall is out of his walking boot and rehabbing for a chance to return by Dec. 3, when the Chants will play for a league title. Chadwell said McCall has yet to practice and is unsure a return that soon is possible.

While Coastal Carolina has secured its trip to the Sun Belt Conference championship, the Dukes are still are still playing for a share of first place in the East Division. Coastal is 6-1 in conference play, while the Dukes are 5-2. JMU is ineligible for postseason play due to its transition to the FBS, but in future years, this would be for the championship,

Coastal Carolina and James Madison played twice before, when both were part of the Football Championship Subdvision. The first was a 31-27 Chanticleers’ victory in September 2005 that ended a six-game win streak for the then-defending Division I-AA champion. Two years later, JMU defeated Coastal 45-10. Coastal joined the Sun Belt Conference in 2016, while James Madison was among four new members this year.

Coastal Carolina started 6-0, but did not enter the Top 25 until defeating Southern Miss 26-23 on Nov. 12. It’s the third straight season the Chanticleers have made the rankings and Chadwell wants his team focused on more. Should they beat James Madison and then win the Sun Belt Conference title a week later, the Chants have a shot at being the Group of Five representative at a New Year’s Six bowl game. “That’s there,” Chadwell said.