No. 24 Beavers, Huskies each look to keep Pac-12 hopes alive 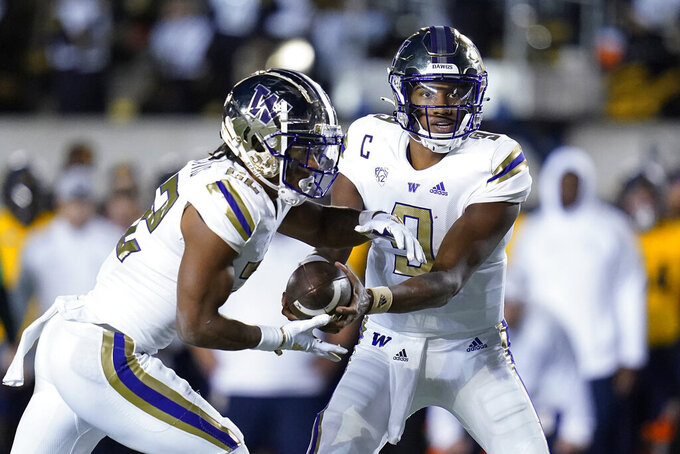 Washington quarterback Michael Penix Jr. (9) hands the ball off to running back Cameron Davis (22) during the second half of an NCAA college football game against California in Berkeley, Calif., Saturday, Oct. 22, 2022. (AP Photo/Godofredo A. Vásquez)

Line: Washington by 4 1/2, according to FanDuel Sportsbook.

It’s an elimination game for the two Pacific Northwest foes. The winner still has a path to the Pac-12 championship game. The loser is all but eliminated and bound for a second-tier bowl game. Both teams had last week off. Ben Gulbranson will make his third straight start at quarterback for Oregon State even with Chance Nolan getting closer to being healthy. Washington has won two straight with more big numbers from QB Michael Penix Jr., but rain and wind are expected for the rare Friday night game in Seattle.

Washington QB Michael Penix Jr. vs. Oregon State’s secondary. Nobody has been able to slow down Penix, who has eight straight games with at least 300 yards passing. He’s the nation’s leader in yards passing and yards passing per game and is fifth in passing TDs. Oregon State’s defense has been pretty stingy against the pass, ranking third in the Pac-12 overall and first in yards per completion allowed. They are one of two teams in the Pac-12 to have more interceptions (10) than passing TDs allowed (8).

Oregon State: RB Damien Martinez. The freshman burst on the scene the past two games with 111 yards against Washington State and 178 and three rushing TDs against Colorado. Oregon State has rushed for 200 yards in consecutive games, including a season-high 270 last time out against Colorado. Considering the expected weather, a big game on the ground from the Beavers could be significant.

Washington: EDGE Bralen Trice. The last time Trice was on the field two weeks ago against California he was named Pac-12 defensive lineman of the week with five tackles, 2 1/2tackles for loss and two sacks. Washington’s defense must do its part in this game and that requires a big performance from Trice, who leads the team with 6 ½ sacks.

Oregon State is ranked in The AP Top 25 for the first time since 2013. The Beavers were No. 25 in the preseason poll that year before losing to Eastern Washington in the opener. Oregon State hasn’t been ranked for multiple weeks since 2012 when it was 6-0 and reached No. 7 before losing at Washington. ... Washington has won the last six games against the Beavers in Seattle. The most recent Oregon State road win in the series was in 2008. ... Washington WR Rome Odunze has at least six catches in five straight games.