No. 24 Coastal Carolina looks to rebound vs Troy after loss 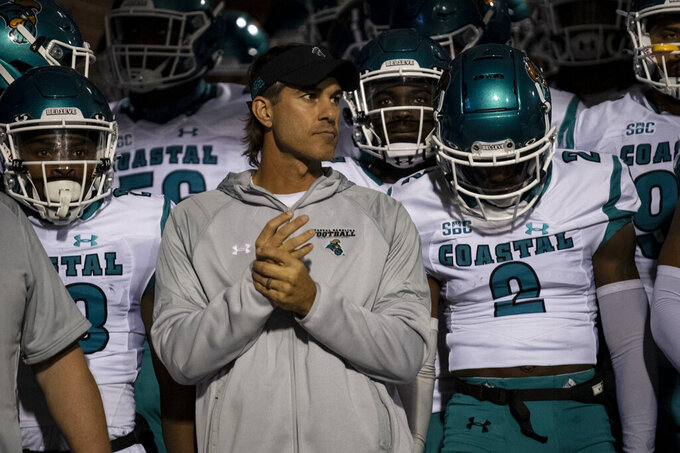 Chadwell said his team took one day to “moan and lament" about blowing several chances to keep their undefeated season intact against the Mountaineers before falling 30-27 on a field goal as time expired in their Wednesday night showcase.

After that, it was time to get back to work.

“I know they remain hungry, focusing on what can we do better,” Chadwell said. “I like where we’re at currently.”

They'll know more about where they're at after Thursday night.

Troy coach Chip Lindsey also is pleased where his team is as well. Picked to finish last in the Sun Belt's East Division this summer, the Trojans are in a four-way tie for the top with the Chanticleers, Mountaineers and Georgia State.

“I know our players are excited for this opportunity to compete and to showcase our program on the national stage,” Lindsey said. "We are going to step up to the challenge.”

Chadwell won't label this an elimination game, but the loser will certainly have a longer, longshot climb to claim the division title and spot in the league's title game.

“Whoever wins this game, it puts you right there where you have a chance to be in first place,” he said. “It’s just big from that standpoint.”

Coastal Carolina hadn't faced much adversity this season as it opened 6-0 for a second straight year. It had pummeled its first six opponents by an average score of 49-15. It seemed on the way to another blowout with its two quick touchdowns before Appalachian State rallied back.

Chants linebacker Silas Kelly said the team worked this week to put aside what happened last game, no matter how much it stung.

“There are a lot of things we thought we could've done to give ourselves a chance” last week, he said. “Doesn't matter.”

Some other things to watch when Troy visits No. 24 Coastal Carolina:

It's Troy's second trip to the Palmetto State after falling at South Carolina 23-14 on Oct. 2. The Trojans kept things tight most of the way against their Southeastern Conference opponent. Troy lost two fumbles, had a punt blocked and was intercepted twice, including one the Gamecocks returned for a pick six.

Gunnar Watson has been Troy's starting quarterback the past two games and has helped the Trojans to victories over Georgia Southern and Texas State, throwing for 352 yards and three touchdowns. Coastal Carolina's Grayson McCall continues to lead the country in completion percentage (77.3). He's passed for 1,726 yards with 15 touchdowns and one interception this season.

The forecast Thursday night in Conway calls for thunderstorms in the evening. For Coastal Carolina center Sam Thompson, that means a bucket of wet balls to practice snaps to McCall. Thompson doesn't do much different when it's wet, other than maintain focus on getting the ball back to the quarterback's hands. “Nothing really changes,” he said. “It's just a mindset.”

Coastal Carolina won the past two over Troy in the final seconds. In 2019, tailback C.J. Marable scored a touchdown and a two-point conversion with 30 seconds left for a 36-35 Chants victory, their first Sun Belt win. A year later, McCall's TD pass to Javion Heiligh in the last minute let Coastal escape with a 42-38 win over Troy.

“It’s been a sad ending the last couple of times we’ve gone out and played Coastal,” Troy linebacker Carlton Martial said. “We know we have to finish better to get the win.”

Coastal Carolina coach Jamey Chadwell believes teams wanting to join the Sun Belt (as Southern Miss announced this week) proves they know the league is on the rise. Chadwell said such moves just show what he believes: “The Sun Belt is the best (group of five league) in the country and a lot of people want to be a part of it.”