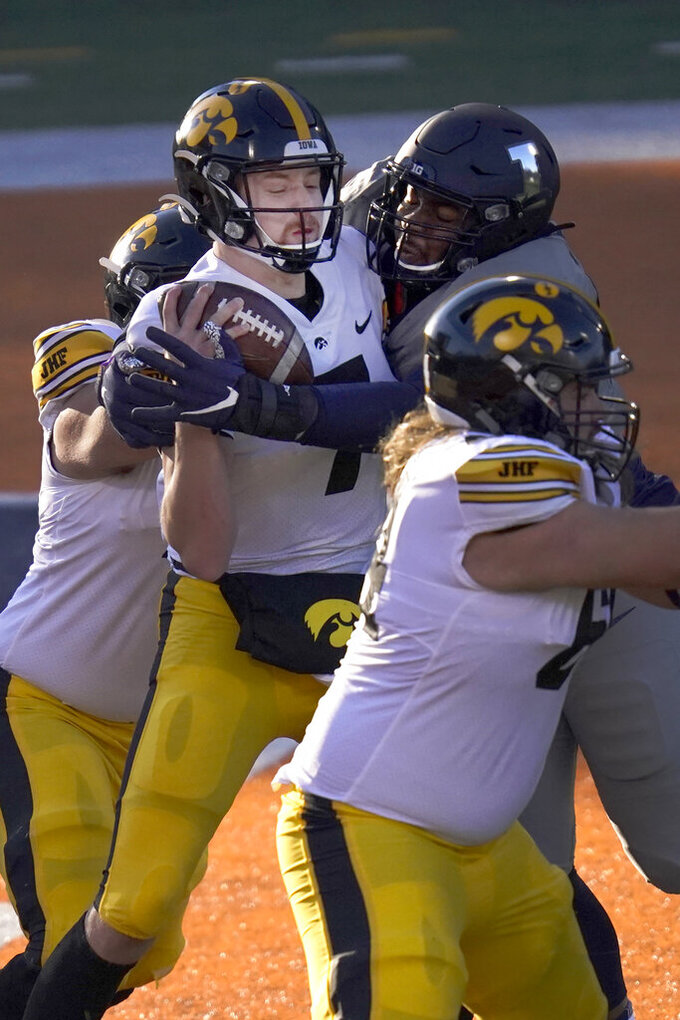 “I think we’d all feel really good had the first quarter maybe gone a little different,” Petras said about his team's slow start. “We just have to try to get in rhythm faster.”

Brandon Peters started 8 for 8 for 101 yards and two touchdowns for Illinois (2-4), but went 2 for 10 for 15 yards before being pulled for backup Isaiah Williams midway through the fourth quarter. Williams was 7 of 16 for 83 yards and a touchdown.

“I felt like we needed to do something different at the end of the game,” Illinois coach Lovie Smith said. “Put Isaiah in and he gave us a spark.”

Iowa's comeback started with a 22-yard pass from Petras to Sam LaPorta to cut the Illini lead to 14-7. It was the sophomore’s first career touchdown catch. Duncan Keith added two field goals to cut the Illinois lead to 14-13 at the half.

“That was huge," Iowa coach Kirk Ferentz said. “We were not even spinning the tires. Our tires weren’t moving. We were stuck. It was rough there for a while.”

Smith said despite the loss, he saw some progress on the field. “We did some good things. We need to go out next week and play better against our rival (No. 16 Northwestern, which clinched the Big Ten West title on Saturday).”

Iowa: The Hawkeyes played like a different team in the second half, shutting down an Illinois offense that seemed unstoppable early.

Illinois: The hot start wasn't enough to keep the Illini from losing to Iowa for the seventh straight time.

Illinois running back Mike Epstein was scratched shortly before kickoff due to an unspecified injury. A team official said it was not COVID-19-related. Starting cornerback Nate Hobbs was injured in the first half and did not return for the Illini.

“Those defensive injuries hurt us,” Smith said. “We couldn't stop them and then we couldn't score,”

The win over Illinois might move Iowa up a couple of notches, especially given No. 18 Wisconsin's 14-6 loss to No. 10 Indiana.

“We spread the ball out pretty well,” Petras said. “After the slow start, we got to see what this offense can really do.”

Iowa: Hosts No. 18 Wisconsin, which lost to No. 16 Northwestern last week and lost a tight one against No. 10 Indiana on Saturday.

Illinois: Travels to No. 16 Northwestern.