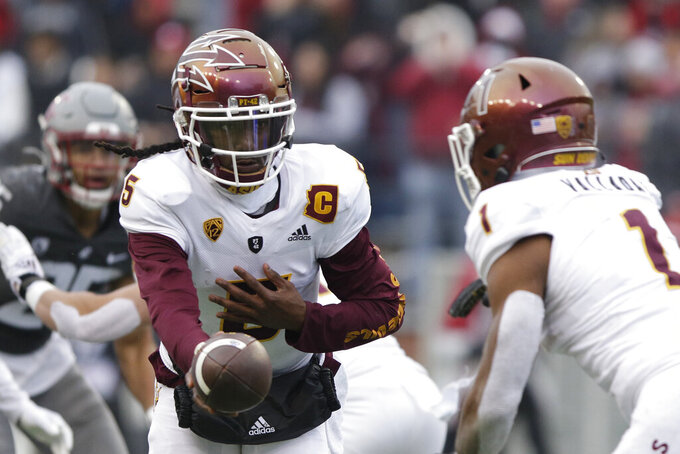 Oregon State is looking to win in Tempe for just the second time in the past 50 years and win a game as a ranked team for the first time since 2012. The Sun Devils are 19-1 at home against the Beavers since 1972. The Beavers' only win in that span came in 2009. Oregon State lost to Washington after being ranked two weeks ago, but moved back into the poll after beating California. Arizona State is coming off a 10-point loss to Washington State.

Arizona State's run game against Oregon State's defense. The Sun Devils have one of the Pac-12's best running backs in Wyoming transfer Xazavian Halladay, but will be facing one of the nation's toughest teams against the run. Oregon State leads the Pac-12 with 107.1 yards rushing allowed per game and held Cal to 9 yards last week, its fewest allowed since 2007. Halladay is second in the Pac-12 with 98.6 yards rushing per game after a season-high 189 against Washington State.

Oregon State: QB Ben Gulbranson. He’s started the past five games in place of Chance Nolan (neck), throwing for 817 yards and seven TDs with an interception. Gulbranson has thrown for two TDs and no interceptions in each of the past two games.

Arizona State: QB Trenton Bourguet. Named the starter over Emory Jones for the Oct. 29 game against Colorado, Bourguet left last week's game with a lower-leg injury but said he will be ready to go on Saturday. Bourguet has thrown for 992 yards and eight TDs with four interceptions this season.

Oregon State has rushed for at least 150 yards in every game this season. ... Arizona State is assured of its first losing record since 2016. ... The Beavers are bowl-eligible in consecutive seasons for the first time since 2012-13. ... Arizona State LB Kyle Soelle leads the Pac-12 with 98 tackles despite not playing due to injury last week. It's unclear if he will play Saturday. ... Oregon State is 16th nationally averaging 32:39 in time of possession per game.