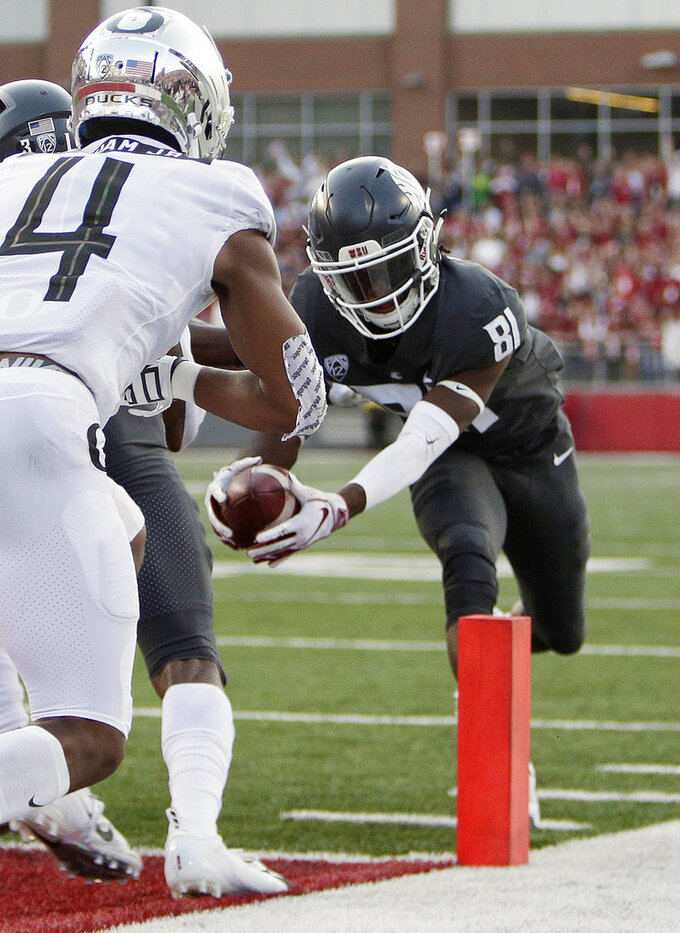 Washington State wide receiver Renard Bell (81) runs for a touchdown against Oregon during the first half of an NCAA college football game in Pullman, Wash., Saturday, Oct. 20, 2018. (AP Photo/Young Kwak)

PULLMAN, Wash. (AP) — One of the biggest days in program history for Washington State started with a celebration outside the gates of Martin Stadium and ended with fans partying on the field.

Gardner Minshew threw a 22-yard touchdown pass to Dezmon Patmon in the back of the end zone with 3:40 left and No. 25 Washington State beat No. 12 Oregon 34-20 on Saturday night.

Minshew was 39 of 51 passing for 323 yards and four touchdowns, picking up his biggest win since arriving at the school as a transfer during the offseason.

"He is a very inspired player and I think inspires the rest of the units," said Washington State head coach Mike Leach on Minshew's late game-winning drive. "So, down the stretch, he does a good job inspiring and they draw from him some."

Down 27-0 at the half, Oregon pulled to 27-20 on Adam Stack's 23-yard field goal with 6:38 left and started to create restlessness for Washington State fans who had seen big leads disappear in the past. The Cougars got a huge play on the next drive from Travell Harris, when he stole a pass from Oregon's Jevon Holland for a 37-yard gain into Oregon territory. Minshew then hit Harris for 11 yards to convert fourth-and-6 and, two plays later, Minshew hit Patmon for the touchdown that finally put away the Ducks.

"Travell, he's a competitor," Minshew said. "He wasn't going to let him take it. He fought for me."

Oregon quarterback Justin Herbert was 25 of 44 for 270 yards and a TD, but it was a big letdown for the Ducks after last week's overtime victory over Washington. The Ducks were lethargic and struggled with execute in the first half, finishing with 39 total yards of offense and just three first downs in the first 30 minutes.

"Any time you play like that in the first half, you're not gonna win many ballgames," Herbert said.

Meanwhile, the Cougars had little trouble scoring in taking the big lead.

Minshew had a pass intercepted by cornerback Deommodore Lenoir to start the game after driving deep into Oregon territory. Minshew and the Cougars then went on a tear, pulling away to the big halftime lead.

Washington State scored on its second possession on James Williams' 24-yard run. Williams bounced off several defenders and stiff- armed his way to the sideline. Minshew found wide receiver Renard Bell for a 16-yard touchdown pass early in the second quarter, and added two more strikes in the final three minutes of the half — a 6-yarder to Easop Winston Jr. and a 15-yarder to Max Borghi.

Herbert scored on an 8-yard run on Oregon's first drive of the second half, but the Ducks twice had to settle for field goals after driving inside the Washington State 20.

"It was a tale of two halves. We certainly played a different brand of football in the second half, but it wasn't enough," Oregon coach Mario Cristobal said.

In a big surprise, Washington State outgained Oregon running the ball. The Cougars finished with 77 yards rushing, while the Ducks were held to 58 yards on the ground. Williams had nine carries for 53 yards, while Borghi had 10 carries for 40 yards.

Oregon: A week after knocking off Washington at home in overtime, the Ducks were flat in the first half and unable to overcome such a large deficit. With two conference losses, Oregon will need help from someone to get back into the North Division race.

Washington State: The Cougars four-game win streak against the Ducks is their longest since the early 1980s. Washington State has a clear path to the North Division title, but will face road tests at Stanford and Colorado, along with Washington in the Apple Cup.

"We want to be in a position to control our own destiny," Minshew said.

Oregon: The Ducks are at Arizona next Saturday.

Washington State: The Cougars travel to Stanford next Saturday.