No. 5 Buckeyes will visit Nebraska looking to keep rolling 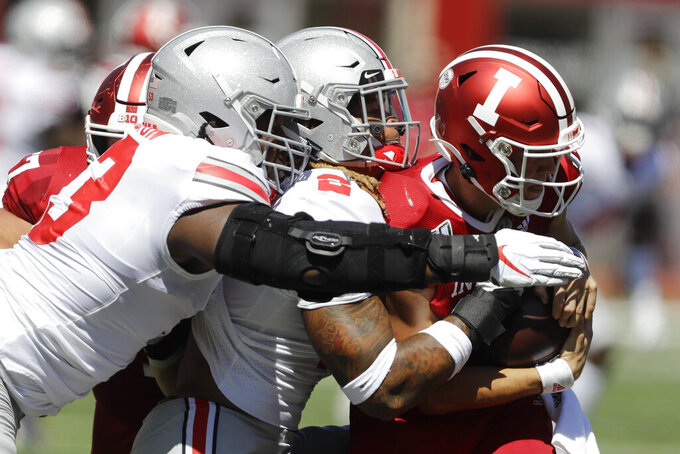 The Buckeyes have outscored four teams by a combined 214-36 and, after missing the College Football Playoff the last two years because of losses to unranked Big Ten West teams, they can ill afford to drop this one. Nebraska almost knocked off Ohio State in Columbus in 2018 and is still looking for a statement win under second-year coach Scott Frost.

Nebraska's secondary vs. Ohio State quarterback Justin Fields. The Cornhuskers have intercepted six passes, tied for first in the Big Ten and fifth nationally, and have a ball hawk in Cam Taylor-Britt. Fields has not been picked off and has thrown a conference-leading 13 TDs. Nebraska converted two turnovers into touchdowns while playing the Buckeyes within five points last year.

Ohio State: DL Chase Young. The preseason AP All-American is third among active FBS players with 21 career sacks, a nation-leading seven of those coming this season. Young had no sacks or tackles for loss in last year's game.

Nebraska: QB Adrian Martinez outplayed first-round draft pick Dwayne Haskins Jr. last year and, after a bit of a slow start this season, found his groove in the second half against Illinois last week.

This is the fourth straight year the teams meet, and they'll continue to play each season through 2021. ... The Huskers, as an unranked team, haven't beaten a top-five opponent since upsetting a No. 4 Texas 14-13 on the road in the 1960 opener. Overall, their last win over a top-five opponent was in 2001, when they beat a No. 2 Oklahoma 20-10 in Lincoln while ranked No. 3. ... Ohio State (915) and Nebraska (900) are among five schools with at least 900 wins. The only other meeting of 900-win teams was last year's Michigan-Ohio State game. ... The ESPN "College GameDay" show returns to Lincoln for the first time since 2007.