No. 5 Michigan finally faces test against No. 10 Penn State 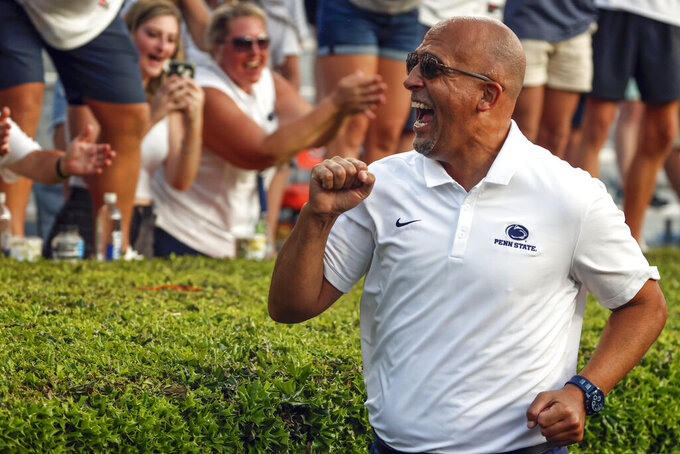 ANN ARBOR, Mich. (AP) — No. 5 Michigan has taken advantage of a favorable schedule, starting strong in its quest to win consecutive Big Ten titles for the first time this century.

The winner will control its fate in the Big Ten race and be positioned to earn a spot in the College Football Playoff. The victors will likely need to win out, of course, and that won't be easy with No. 2 Ohio State left to play ahead of the conference championship game.

“Penn State is always a tough game,” Michigan guard Zak Zinter said. “The intensity level, the focus, preparation level, you’re always going to take it up a notch. ... They're a good team, so the preparation does go up a little bit for that.”

The Nittany Lions are pretty fired up, too.

“Games like this, where there’s more national attention, it’s always fun," said sixth-year quarterback Sean Clifford, who handed the Wolverines their last loss at home, in 2020. “Games like this, you come to Penn State to play in.”

Michigan and Penn State are meeting as top-10 teams for the first time since 1997 and third time in the series. The Wolverines are aiming to win consecutive Big Ten titles since 1997 and 1998.

The Wolverines are hoping experience doesn’t matter at quarterback.

Penn State has the 24-year-old Clifford starting at the pivotal position for a fourth season. Michigan has sophomore J.J. McCarthy starting against a ranked team for the first time.

“He’s young, but he’s experienced" Penn State cornerback Kalen King said. "He’s got like a certain swagger to him that not a lot of quarterbacks in the country have.”

Penn State's Curtis Jacobs and Jonathan Sutherland were known commodities coming into the season because both outside linebackers played significant snaps in the past. Middle linebackers Tyler Elsdon and Kobe King have been learning on the fly.

Elsdon has started every game with King has been a backup. The duo has combined for 28 tackles to help the Nittany Lions allow just 79.8 yards rushing per game.

The linebackers, and the rest of the defense, faces its biggest test yet. Michigan, led by running back Blake Corum, is averaging 212.3 yards rushing per game.

Morris has five sacks, ranking second in the Big Ten, and seven tackles for losses to lead a defense that is giving up 17 points a game in conference play. In last week's 21-point win at Indiana, the Wolverines had seven sacks.

“That was as good a pass rush as you could hope for and Mike’s a big part of that,” coach Jim Harbaugh said.

Penn State is coming off a bye, and the break may help wideout KeAndre Lambert-Smith get back on the field.

The sophomore exited the last game against Northwestern with a right leg injury and was in a walking boot by the end of the game. Coach James Franklin said he was hopeful Lambert-Smith, the team’s third-leading receiver with nine catches for 104 yards and a touchdown, would be available.

Michigan Stadium's tunnel, a long and narrow walkway that leads from the locker rooms down a steep incline to the field, will be named after 1997 national championship-winning coach Lloyd Carr.

“There’s obviously a lot of things that have changed around Ann Arbor, Michigan football, the campus over decades, but one thing that hasn’t is that tunnel,” Harbaugh said. “It’s gritty. It’s awesome, just like the coach, Lloyd Carr, that it’s going to be named for.”