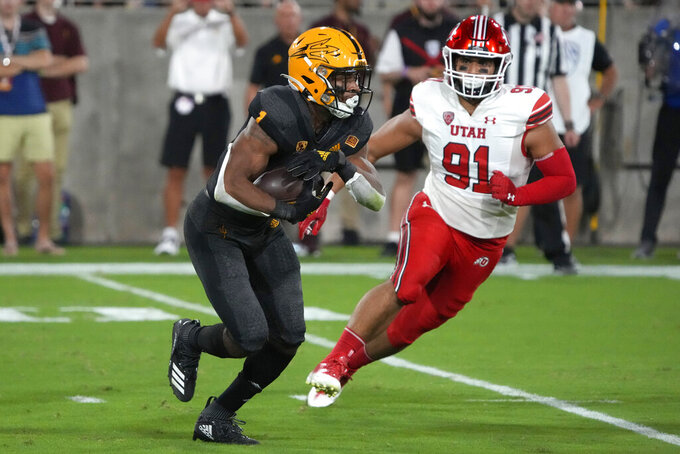 The Trojans escaped with a 17-14 win at Oregon State last week and Lincoln Riley’s team returns home looking to get its passing offense back on track. The Sun Devils are grasping for any sort of positive momentum following a 34-13 loss to Utah in interim coach Shaun Aguano’s first game.

USC QB Caleb Williams vs. Arizona State LB Kyle Soelle. Williams delivered when he had to against the Beavers, finding Jordan Addison for the winning touchdown with 1:13 remaining. But the sophomore mostly struggled, throwing for just 180 yards on 16 of 36 passing, and will need to get back on track before key games against Washington State and the Utes. Soelle can cause problems when he drops into coverage as he leads the Sun Devils with two interceptions.

Arizona State: RB Xazavian Valladay. The Wyoming transfer had a streak of three straight games with at least 100 yards rushing and a touchdown to start his Sun Devils career snapped against Utah. To stay in the game against USC, Arizona State will need Valladay to grind out yards and control the clock.

USC: LB Eric Gentry. Gentry’s length and awareness have been vital to the Trojans’ ability to force takeaways. The Arizona State transfer had one interception against the Beavers and tipped another pass resulting the pick that sealed the win.

USC leads the FBS with a plus-14 turnover margin (11 interceptions, three fumbles recovered). The Trojans have yet to turn the ball over on offense or special teams. ... Arizona State has just two sacks through four games, which is tied for 128th out of 131 FBS teams. ... Addison has six touchdown receptions to start his USC career. Including his Biletnikoff Award-winning season at Pitt, Addison has 23 touchdown catches in his past 18 games. ... Sun Devils LB Merlin Robertson had 10 tackles, one tackle for loss, an interception and a fumble recovery against USC to open the pandemic-shortened 2020 season, but Arizona State lost 28-27 after allowing two touchdown passes in the final 2:52. ... Trojans RB Travis Dye has run for 340 yards and three touchdowns in the past three games. He has three consecutive games with at least 100 yards rushing for the first time in his college career. ... Arizona State has allowed 510 yards rushing on 96 carries in its past two games. ... USC has scored 69 of its 169 points (40.8%) following a takeaway. ... Arizona State is 2-2 in its past four trips to the Coliseum after losing seven straight games at USC from 2001-2012.