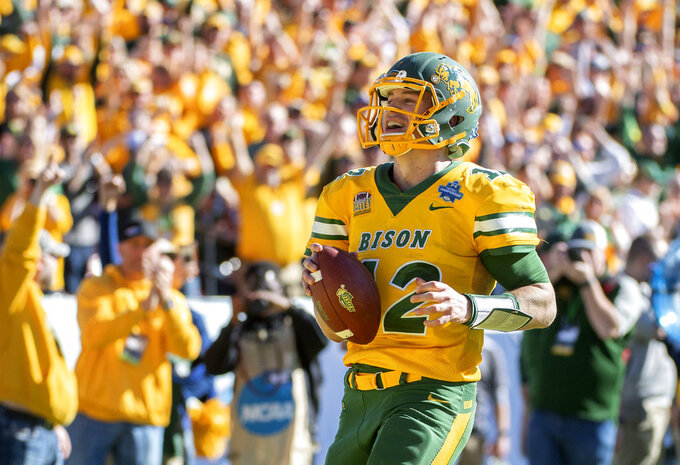 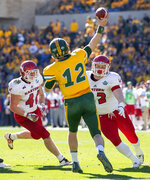 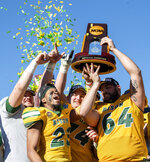 FRISCO, Texas (AP) — A perfect ending for North Dakota State coach Chris Klieman and quarterback Easton Stick, and yet another championship for the Bison.

Stick had three touchdown runs and threw for two more scores and the Bison beat Eastern Washington 38-24 on Saturday for their record seventh FCS title, the fourth in five years with Klieman as head coach before he takes over at Kansas State.

"It was a special journey — 15-0, end it with a national championship. ... The story's complete," said Klieman, 69-6 as head coach and part of all of those titles, three as defensive coordinator. "That's something that movies are made out of, dreams are made out of, books are written about."

North Dakota State (15-0) has won all seven FCS titles over the past eight seasons.

"This place is special," Stick said. "Quarterback's a unique position. You're only as good as players you're surrounded with. ... I'm so thankful for every guy I played with because as a freshman you come in and you just want to be a part of it."

As a redshirt freshman three years ago, Stick was 8-0 starting when Wentz was hurt. That included three playoff games before Wentz returned for the championship game only a few months before the Philadelphia Eagles made him the No. 2 overall pick in the 2016 NFL draft.

Eastern Washington (12-3) got to 17-10 with a 2-yard touchdown reception on a fake field goal in the final minute of the first half. Holder and backup quarterback Gunner Talkington took the snap and was still on his knee when he shuffled the ball to a sweeping Jayce Gilder, who dived into the end zone.

The second half began with the teams combining for three turnovers and three long touchdowns in less than 4 1/2 minutes. All of the scores, including Stick's TD passes of 23 and 78 yards to Darrius Shepherd , came in a span of four plays over 68 seconds.

"It was so back and forth. It was pretty crazy," said Sam McPherson, who had a 75-yard TD run on Eastern Washington's only play between Stick's two TD passes . "It was wild for sure. It definitely got us up, got us down."

There were interceptions on consecutive plays before Eastern Washington turned it over again when Talkington, playing with starter Eric Barriere out a series while getting his throwing hand looked at, fumbled when being sacked by Stanley Jones. That set up the 23-yard pass Stick threw to Shepherd beyond the reach of three defenders.

Eastern Washington: The Eagles won the first FCS championship game played at the pro soccer stadium north of downtown Dallas. That was eight years ago in their only other title game appearance. They beat NDSU in the quarterfinal round of the playoffs that year but are 0-3 against the Bison since.

North Dakota State: The Bison had been tied with the six FCS (formerly Division I-AA) titles Georgia Southern won before it moved to the FBS level. ... Klieman matched the record four FCS titles won by Jim Tressel as coach of Youngstown State before he won a national title at Ohio State.

Klieman and Stick went out with multiple championships in their final game, just like coach Craig Bohl and quarterback Brock Jensen five years ago when the Bison wrapped up another 15-0 Fargo-to-Frisco season.

According to the final stats, Eastern Washington finished with eight penalties for 60 yards. Those penalties hurt more than that, since three of them in the first half wiped out big plays. Two were on their opening rive when the Eagles had a pass play inside the 10 wiped out and then a 19-yard run erased by another penalty.

North Dakota State plays its first game for new head coach Matt Entz, the Bison defensive coordinator the past five seasons, in its 2019 season opener on Aug. 31 against Butler at Target Field in Minneapolis.