Oklahoma State goes into Baylor makeup out of B12 contention 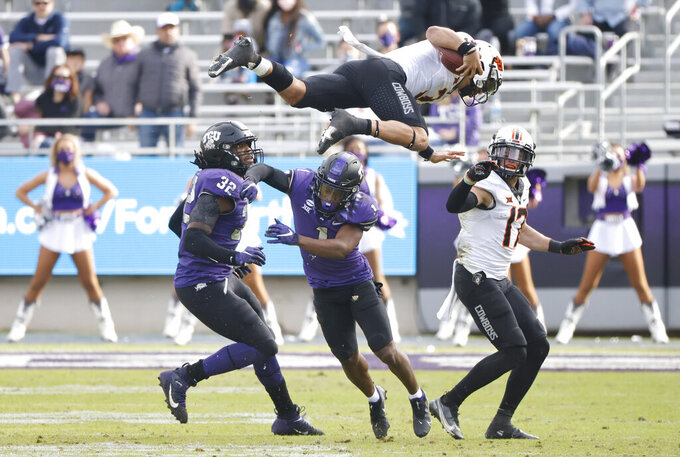 WACO, Texas (AP) — When Oklahoma State was supposed to play at Baylor in mid-October, the Cowboys were the No. 6 team in the Top 25 with expectations to contend for a spot in the Big 12 championship game, maybe even the College Football Playoff.

Two months later, the Cowboys (6-3, 5-3 Big 12) are out title contention going into the makeup Saturday night at Baylor in what now is a regular-season finale. The game was still on despite Baylor temporarily closing its football facility Thursday.

The Cowboys have lost three of their last five games, including a 28-point Bedlam loss to No. 13 Oklahoma. They are coming off a 29-22 loss at TCU, which won last week despite having five turnovers.

Tylan Wallace is the Big 12's top receiver, but 2019 FBS rushing leader Chuba Hubbard hasn't played the last two games and has been plagued by injuries since piling up 480 yards rushing during a 4-0 start. And the Cowboys have a young and unseasoned offensive line due to opt-outs and injuries.

“The guys that are playing for us right now is the third wave. We have eight guys that have not been available that were available to us in June,” coach Mike Gundy said, adding some "came from just hanging out at practice, drinking some Gatorade, looking forward to what lunch was going to be to all the sudden you’re a starter.”

Baylor (2-6, all Big 12) goes into the final game of coach Dave Aranda's first season after playing Oklahoma closer than the Cowboys did. The Bears in that 27-14 loss last week held the Sooners to 278 total yards, their fewest since 2015, and broke their 60-game streak of scoring at least 28 points.

"Just focus on what’s right in front of you and knock it out,” Aranda said of his defense.

Baylor junior linebacker Terrel Bernard was the Big 12′s leading tackler with 55 in the first five games before a season-ending shoulder injury. Abram Smith, a junior converted running back, has started in his place the last three games, matching that 11-tackle-per-game average with 33.

“I love Abram, and just his willingness to learn and grow,” Aranda said. “When we first started, I remember it was new for him to be in there, and there were some things that didn’t come as natural as maybe you’d like. That didn’t deter him. He kept at it.”

Oklahoma State is a slight favorite, but the Cowboys have lost five of six in the series and each of their last four trips to Waco.

“This is like every game for us, with where we’re at now as we’re starting to get a little bit better up front with some guys, and as we start to continue defensively and try to make up for a few guys not being in there," Gundy said. "Every game will be challenging for us."

Oklahoma State wound up with consecutive open dates when the Big 12 put off the scheduled Oct. 17 game at Baylor because of an outbreak of positive COVID-19 tests in the Bears program. They came out of that break with a 24-21 win over No. 10 Iowa State, the only conference loss for the Cyclones, who will play Oklahoma in the Big 12 title game. The Cowboys are 2-3 since, with their two wins by a combined eight points.