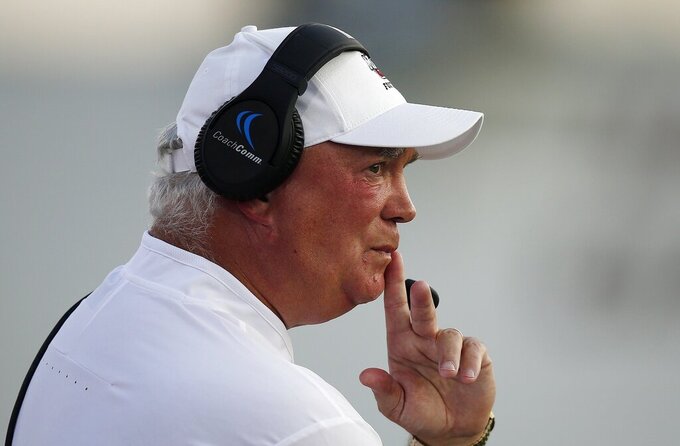 FILE - In this Aug. 25, 2018, file photo, Massachusetts coach Mark Whipple watches from the sideline during the first half of the team's NCAA college football game against Duquesne in Amherst, Mass. Pittsburgh coach Pat Narduzzi’s biggest coup during the offseason might be the 61-year-old passing game guru with a reputation as a quarterback whisperer. (AP Photo/Michael Dwyer, File)

PITTSBURGH (AP) — Pittsburgh coach Pat Narduzzi's biggest coup during the offseason might not be the any of the players who signed letters of intent to join the reigning ACC Coastal Division champions, but a 61-year-old passing game guru with a reputation as a quarterback whisperer.

Welcome back to Pittsburgh, Mark Whipple.

More than a decade removed from a stint as the quarterbacks coach for the Pittsburgh Steelers — where he mentored rookie Ben Roethlisberger — Whipple is back in town working on the other side of the building the Steelers share with the Panthers as Pitt's new offensive coordinator. His goal is to revitalize a unit that became alarmingly one-dimensional in 2018 even as the Panthers reached the ACC title game for the first time.

Whipple wasn't necessarily looking to get back to work after stepping down as head coach at Massachusetts last November, but the chance to work at a Power Five school for a coach he's known for more than 20 years was too good to say no to. Whipple's relationship with Narduzzi dates back to the 1990s, when Narduzzi was an assistant at Rhode Island while Whipple served as the head coach at Brown.

When Narduzzi dismissed Shawn Watson in January after Pitt ended the season at 7-7, he reached out to Whipple to see if he'd be interested working together. It didn't take Whipple long to decide. Though Kenny Pickett struggled during his first full season as a starter in 2018 — ranking near the bottom of the ACC in every major statistical passing category — Whipple is impressed by what he's seen on tape and in the way Pickett and the rest of the quarterbacks on the roster.

Whipple downplayed the idea that the offense needs a complete makeover with running backs Qadree Ollison and Darrin Hall — who became the first duo on school history to each top 1,000 yards rushing in the same season — graduating.

"These guys have a look in their eye that they're ready to make a nice step," Whipple said. "They won the Coastal ... We've got some ability. It's not an overhaul in that way."

Maybe, but Narduzzi understands the Panthers need to be more of a threat in the passing game than they were in 2018. Pitt finished next to last in the 14-team ACC in yards passing per game, ahead of only Georgia Tech, which rarely passes out of the triple-option.

Enter Whipple, whose resume includes multiple stops at the college and pro level with one recurring theme: an ability to create a dynamic passing attack even when faced with a talent deficit.

"It's always impressed me what he did to a quarterback," Narduzzi said. "That guy turns quarterbacks to gold. He's had success throwing the ball, everywhere he's been."

Though Pickett — who sat in during Whipple's interview with Narduzzi — will start the spring atop the depth chart, Whipple's late arrival creates a level playing field of sorts. Whipple is so new, he hasn't been on campus as long as incoming freshman quarterback Davis Beville, who started school last month after signing with Pitt in December.

The 6-foot-6 Beville, who is from Greenville, South Carolina, headlined the signing class the Panthers wrapped up Wednesday. Beville called the decision to bypass his final semester of high school "difficult" but one he felt was necessary to help him be successful at the collegiate level.

"Obviously no one comes to sit behind anybody," said Beville, who added he will return home for senior prom and graduation at the end of the spring. "The big thing for me is to just push Kenny first and then just compete, just see where it goes from there."

There's plenty of recent history to rely on. Pickett came to Pitt in January of 2017 as the fourth quarterback on the depth chart. By the end of the year he was starting in an upset of then-second ranked Miami. Beville knows whether he plays or not in 2019 is not up to him, but he does know he'll have a chance to create a pretty compelling argument.

"I'm going to do everything I can, put in all the work I can to be in that position," he said.