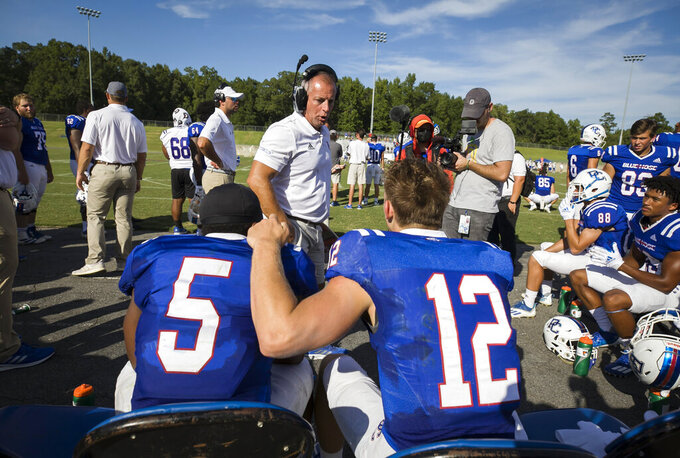 Not even new Presbyterian football coach Kevin Kelley expected the record-setting offensive fireworks from his team and quarterback Ren Hefley on Saturday.

“Definitely didn't anticipate that,” Kelley told The Associated Press on Sunday. “I think I'm not good at many things in the world, but I'm good on the offensive side of the ball and worked really hard in that area.”

“I'd knew we'd be creative on that side of the ball,” Kelley continued.

That's what Kelley was known for at Pulaski Academy, an independent high school in Arkansas he led to nine state titles in 18 years. Kelley became known as the coach who never punted, something he continued with the Blue Hose this week.

Presbyterian, located in South Carolina, threw 12 touchdowns passes as it put up 621 yards through the air against St. Andrews, an NAIA school from Laurinburg, North Carolina.

The Blue Hose tried nine onside kicks — recovering the opening one after winning the toss and deferring — and converted four of five fourth-down tries.

Kelley's philosophy makes sense — give his offense more opportunities to score. What's complex is the discipline he needs from his players to make the system run as effectively as possible.

Hefley made sure the numbers were on Presbyterian's side. The 6-foot, 197-pound sophomore spent the 2019 and 2020 seasons aiding the Wolverines' scout team.

Before that, he was coached by Kelley in fifth through ninth grades in Bryant, Arkansas, as the coach taught his system to the youth programs so they'd be ready should they play at Pulaski.

Hefley moved to another high school because Pulaski had an established starter. But when Hefley was looking for playing time and saw his one-time coach was at Presbyterian, he signed on.

Hefley understood the system, Kelley said, and gave the coaching staff an extra teacher for the rest of the team.

The results showed this week. Hefley had four scoring throws of 25 yards or longer, including a 62-yard TD and a 79-yard TD.

“It was really a natural fit for him,” Kelley said.

Hefley was named the Pioneer Football League's offensive player of the week Sunday.

Kelley's had a busy weekend, receiving texts and calls from friends and supporters, including UCF coach Gus Malzahn. The two knew each other as high school coaches in Arkansas and have stayed close through the years.

The biggest thing for Kelley was for his players who had questions all offseason about whether what he told them could work when it came to games. The majority of the roster hadn't had a winning season in college and didn't play last year because of the COVID-19 pandemic.

“Those kids, when you say things are going to be different, well, they've heard that before,” Kelley said.

After Saturday's result, Kelley said he's already had some of his players text him and say, “OK, coach, I get it now. You were right the whole time.'"

Kelley may have an easier time getting his team's attention this week. He knows, though, that Presbyterian will run into adversity during the season. The Blue Hose compete in the non-scholarship Pioneer league, which literally stretches coast to coast with San Diego a member.

Kelley understands why more coaches don't adopt his offensive style. Then again, he doesn't want them to.

“Then we wouldn't have an advantage,” he said.