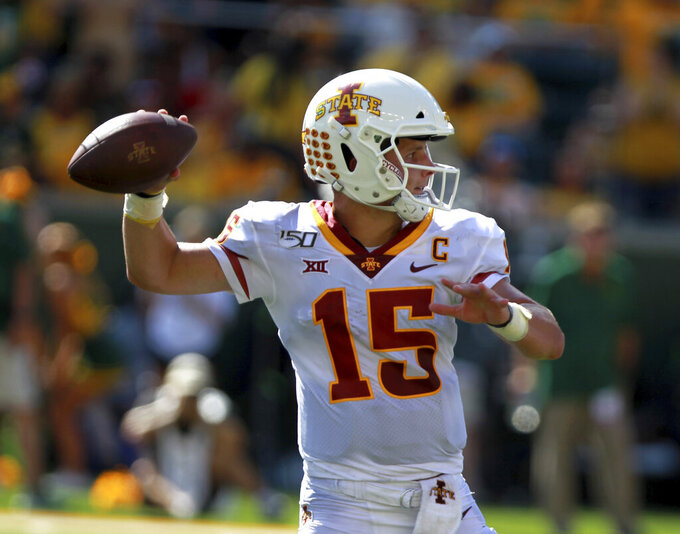 Some things to watch on the second Saturday in October in the Big 12:

No. 6 Oklahoma (5-0, 2-0 Big 12) vs. No. 11 Texas (4-1, 2-0). The second Saturday in October at the State Fair of Texas means the Red River rivalry game, and that now can be the first of two meetings in the same season. The Longhorns won the regular-season matchup last season, then Oklahoma won the rematch in the league title game for its fourth Big 12 title in a row and third College Football Playoff appearance. Oklahoma QB Jalen Hurts goes into his first game against Texas averaging 404.4 total yards per game (304.6 passing, 99.8 rushing). Texas' Sam Ehlinger has had 391, 386 and 384 total yards in his three games against Oklahoma — the three highest outputs by a Longhorns QB against the Sooners. He scored nine touchdowns (four passing, five rushing) in the two games last year.

Seven Big 12 teams have made it into the Top 25 poll this season. Three of them lost their first ranked game and dropped out: Kansas State, Oklahoma State and TCU. Kansas State lost at Oklahoma State, which then got ranked and lost at Texas Tech. The Red Raiders now play Baylor, in playing for the first time as a ranked team. ... Iowa State is 8-0 in October over the past three seasons. The Cyclones and No. 1 Alabama are the only Power Five teams without an October loss in that span. ... The four Big 12 teams with an open date are all coming off a loss: Kansas, Kansas State, Oklahoma and TCU.

Texas is listed as a double-digit underdog against the Sooners. The last five meetings at the State Fair of Texas have been decided by a combined 25 points. Oklahoma has only a 7-6 edge in the last 13 October meetings, and lost last year as a favorite.

Brock Purdy is the first Iowa State quarterback with 300 total yards in four consecutive games. The sophomore is the Big 12's top passer at 316 yards per game, and is second in the league with 356 total yards per game. His four touchdowns (two passing, two rushing) last week against TCU made him only the fourth FBS player this season with multiple games of at least two passing and two rushing TDs.