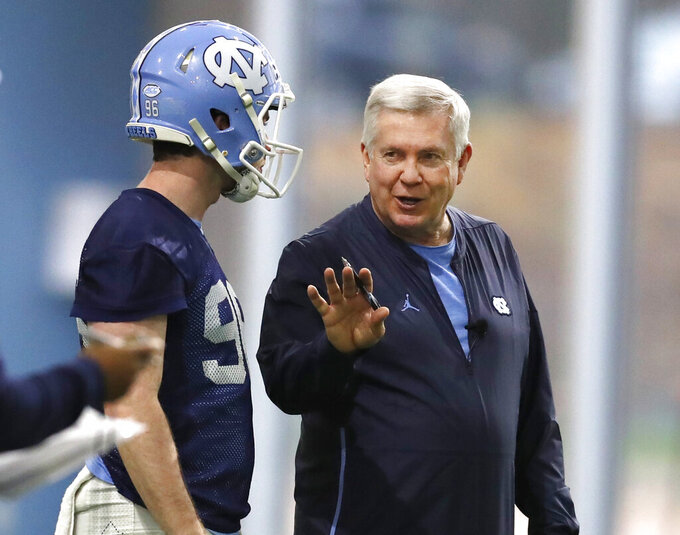 CHAPEL HILL, N.C. (AP) — Mack Brown has accomplished nearly everything a college coach could want, from winning a national championship to being inducted into the College Football Hall of Fame.

Yet the 67-year-old Brown is choosing to stand in the heat and thick humidity on the North Carolina practice fields, typing out notes on his smartphone while watching drills for the program he's charged with turning around once again.

Brown is back in college coaching for the first time since the 2013 season. His return comes at the same program he built into top-10 national status more than two decades earlier. It's familiar surroundings for Brown to reconnect with the profession he missed while working in broadcasting since last coaching at Texas.

"Every day that I coach," Brown said, "reinforces the fact that I love this stuff and I should be doing it."

The Tar Heels are hoping Brown's veteran touch, polished with shining success at every stop, and his familiarity with the program he once coached for a decade has made him the perfect choice to stop the freefall that ended Larry Fedora's seven-year coaching tenure.

They won 11 games, cracked the top 10 in the Top 25 poll and played in the Atlantic Coast Conference championship game as recently as 2015. But UNC has lost 21 of 27 games dating to November 2016, including a league-worst 2-14 ACC record through 2017 and 2018. Along the way, the Tar Heels had multiple losses in which they kept finding ways to hand over fourth-quarter leads, struggled in recruiting and saw plenty of empty seats in their Kenan Stadium home.

That didn't deter Brown, who returns as the winningest active coach in the Bowl Subdivision ranks (244 wins) ahead of Alabama's Nick Saban (232) and Notre Dame's Brian Kelly (231). He led Texas to nine 10-win seasons during a 16-year run there, including an unbeaten 2005 season that ended with Vince Young and the Longhorns edging USC in a Rose Bowl classic.

Before that, he coached the Tar Heels from 1988-97, surviving two 1-10 seasons to start his tenure and pushing the Tar Heels to a 20-3 mark in his final two years.

Brown has talked about how he likes "to fix things" since returning to Chapel Hill, then spent the spring pushing players for more with his familiar affable demeanor.

"That's why I sit with different sets of young guys at lunch every day and dinner at night, so I can ask questions and talk to them," Brown said. "So between trying to mentor the young people and pick them up, trying to help our coaches with the knowledge that I've had in coaching . trying to help a team that has no confidence get some confidence and how do you win fourth-quarter games — we constantly talk about that. And I love all that stuff."

UNC opens against South Carolina in Charlotte on Aug. 31, though there have already been off-field gains. The school sold out its season tickets for the first time in at least a decade. The Tar Heels have also taken a jump in recruiting — something Brown thrived in both in his first stint at UNC and later at Texas — to 17th nationally in 247sports.com's rankings for next year's class.

"I think he has an unbelievable ability to make people feel like they can do more than they believe they can do," athletic director Bubba Cunningham said in June. "I think he inspires people. I think he draws people to him and to his program."

Brown said the first step was building trust with the players he inherited, noting last month they had gone through losing, a coaching change and then "here comes this new guy in that's been out of coaching for five years."

Tight end Jake Bargas said Brown sold the players by telling them: "You work for me and I'll work for you."

"I think once you're a coach, you're always a coach," Bargas said. "You could tell his heart's in this. It doesn't matter, I think age is just a number. He's out here and he wants to be here, you can tell. He's passionate about it and we're passionate about it. You put those two things together, you're going to succeed."

Brown talks with the same enthusiasm. He turns 68 four days before the opener and has six grandchildren, yet said he has more energy and excitement now than at the end of his Longhorns tenure.

He figures he's won here before — and can do it again.