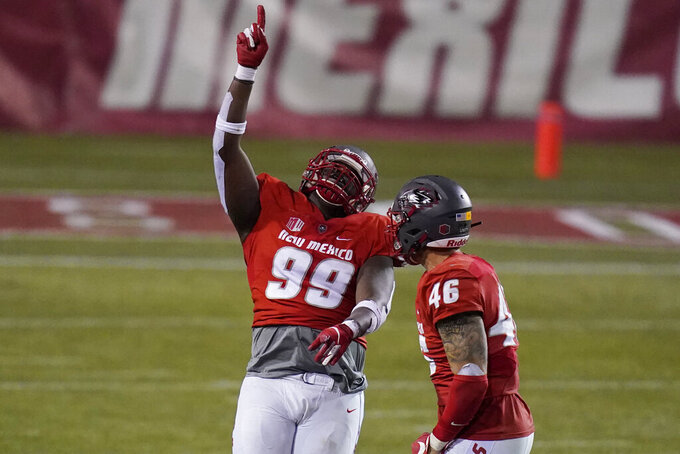 Isaiah Chavez — listed as New Mexico’s fifth-string QB in the spring — took over for fellow walk-on Connor Genal who left in the second quarter after suffering an apparent left-wrist injury. Chavez finished 5-of-10 passing for 55 yards without an interception.

Chavez, on fake a jet sweep, hit a wide-open Bobby Cole who raced the final 25 yards untouched to give New Mexico a 17-16 lead with 6:22 to play.

Wyoming's Dontae Crow returned the ensuing kickoff 40 yards to near midfield but nose tackle Ben Gansallo sacked Williams two plays later, bringing up third-and-21 and knocking Williams out of the game. Backup QB Gavin Berrup hit Eberhart for an 18-yard and then on fourth-and-2 pulled the handoff on a read-option play and raced 38 yards to the 7 but but Shook forced a fumble by Smith on the next play and Jake Saltonstall recovered at the 5.

The Wyoming defense forced a three-and-out and started the ensuing drive at the New Mexico 44. After three consecutive incomplete passes, Shook intercepted a fourth-and-10 pass by Berrup to seal it.

Running back Xazavian Valladay, a first-team all-Mountain West selection as a sophomore last season, did not play for the Cowboys due to an injury to his left leg suffered during the first quarter of last week's win over UNLV.

Wyoming linebacker Chad Muma Jr. — who went into the game tied for sixth in the nation averaging 12.3 tackles per game — was ejected for targeting just before halftime. He finished with 10 tackles, including two for losses, against New Mexico.