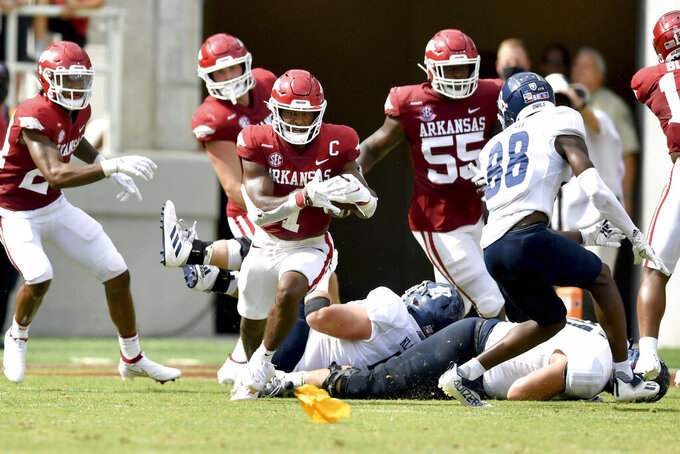 Arkansas defensive back Jalen Catalon (1) returns an interception against Rice during the second half of an NCAA college football game Saturday, Sept. 4, 2021, in Fayetteville, Ark. (AP Photo/Michael Woods)

Line: Texas by 7 1/2 according to FanDuel Sportsbook.

Texas jumped six spots in the AP rankings and wants to keep rising under new coach Steve Sarkisian. Beating a legacy rival on the road would further ramp up the energy in Austin. Arkansas is also rebuilding under second-year coach Sam Pittman and could give Texas a taste of what to expect when the Longhorns eventually join the SEC.

Texas quarterback Hudson Card was turnover free in his debut last week, but will be making his first career road start and is sure to get a hostile reception in Fayetteville. Razorbacks defensive back Jalen Catalon had two interceptions against Rice.

Texas: Slot receiver Jordan Whittington had seven receptions for 113 yards and a touchdown last week. He gives Card the perfect safety valve on passing downs, while also keeping defenses off balance if they focus on stopping Longhorns running back Bijan Robinson.

Arkansas: Linebackers Grant Morgan and Bumper Pool were ejected against Rice after targeting calls. Morgan will be able to start against Texas, but Pool must sit out the first half.

Texas and Arkansas were old Southwest Conference rivals and haven't met in the regular season since 2008 ... Robinson was the Big 12 offensive player of the week with 176 total yards against Louisiana-Lafayette ... Arkansas' 31 points in the second half against Rice were the most for the Razorbacks after halftime since 2003.

By Brian Mahoney 3 hrs ago
By Gary B. Graves 6 hrs ago
By Dave Campbell 8 hrs ago
10 hrs ago
By Raul Flores 11 hrs ago