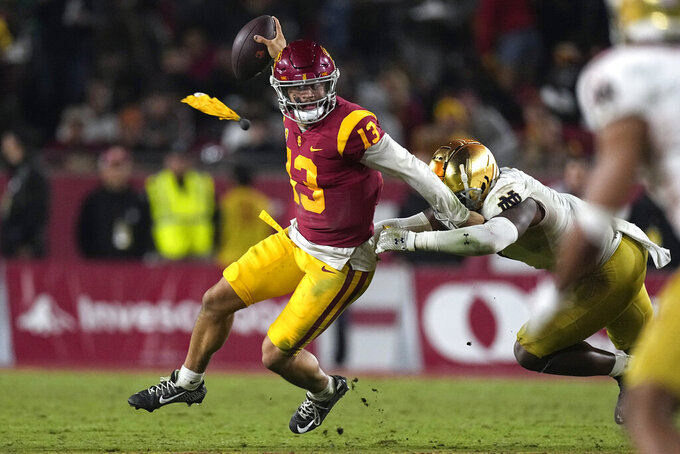 Southern California quarterback Caleb Williams, left, escapes a tackle by Notre Dame defensive lineman Justin Ademilola as a flag is thrown on the play during the second half of an NCAA college football game Saturday, Nov. 26, 2022, in Los Angeles. (AP Photo/Mark J. Terrill)

ARLINGTON, Texas (AP) — The status of Southern California quarterback Caleb Williams for the Cotton Bowl is uncertain because of what his coach described Sunday as a “significant" hamstring injury for the likely Heisman Trophy finalist.

Williams got hurt on a run in the first half of USC's loss to Utah in the Pac-12 championship game Friday night. He played the rest of the game, even when it was clear that he was in pain.

After the Trojans were selected to face Tulane in the Cotton Bowl, coach Lincoln Riley said Williams would need a lot of rehab to have a chance to play in the Jan. 2 game.

“He’s got a significant hamstring injury. It’s good we’re not playing probably in the next two to three weeks,” Riley said. “We’ll try to rehab that. Those things, you know, hamstrings are different for everybody, but the nature of his is pretty severe. I mean, if we played in the next couple of weeks, he most likely would not be available. We will have to see how it progresses.”

Williams, who went with Riley from Oklahoma to Southern California after last season, has thrown for 4,075 yards and 37 touchdowns with four interceptions this year, and has run for 372 yards and 10 more scores. He got hurt on a 59-yard run in the Pac-12 title game, but still finished with 363 yards passing and three touchdowns.

“He’s a warrior. He fought through it the other night when a lot of guys wouldn’t,” Riley said. “But he’s pretty sore, as you would expect. And we’ll rehab him hard and hope to have him available.”