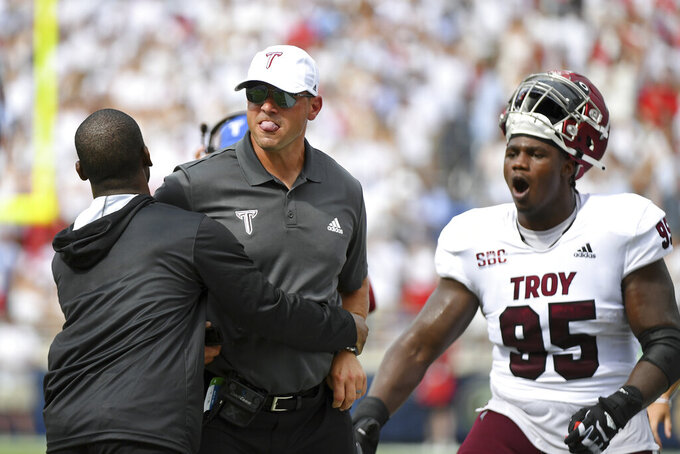 OXFORD, Miss. (AP) — Jaxson Dart thought about it. But the Mississippi quarterback did not want to get greedy in his debut performance.

“I wanted to throw deep. I wanted to. It just wasn’t there,” said Dart after evaluating his performance as No. 21 Mississippi beat Troy 28-10 on Saturday in the opener for both teams. “They took that away but we had a lot of success underneath and we gashed them in the first half.”

Ole Miss built a 21-0 lead in the opening 20 minutes on drives of 82, 68 and 83 yards and was never seriously threatened. Dart was 18 of 27 for 154 yards, with a 9-yard touchdown pass to Malik Heath to cap the opening series of the second half.

The sophomore was efficient during the first half scoring drives, although the longest pass play covered 22 yards, a flare to running back Zach Evans. The Rebels relied primarily on a running game that produced 266 yards and mistake-free decision making by Dart.

“That’s a good thing to be 1-0. Jaxson did a good job, especially early,” Mississippi coach Lane Kiffin said. “The storyline was defense and the running game on offense. You want to play great in every areas for four quarters, so we will find a way to turn a poor second half into something positive.”

Evans, a junior transfer from TCU, rushed for 130 yards on 20 carries as Ole Miss finished with 433 yards of total offense. The Rebels scored on 2-yard runs in the first half by Ulysses Bentley IV, Jonathan Mingo and Quinshon Judkins.

“I just looked for green grass and the offensive line gave all the backs the green grass,” Evans said. “After you get green grass, then it’s all about the eyes and feet. We got a lot to build off with this win.”

Gunnar Watson threw for 275 yards for Troy, completing 34 of 47, with a 3-yard touchdown pass to Rajae’ Johnson in the final quarter.

“We’re disappointed with the loss because we didn’t come here to play close. We came to win,” Sumrall said. “But when it got to 28-3, it could have snowballed and our guys kept fighting all the way.”

Troy: Sun Belt Conference teams, even those like Troy with regular-season title and postseason hopes, are not expected to win on the road against SEC opponents. The Trojans were impressive on special teams as Mike Rivers had a 49.6 average on five punts and Brooks Buce ended the first half with a 31-yard field goal.

Mississippi: The answer was yes. An encouraging yes. The question whether Ole Miss could pull it together quickly despite wholesale changes in assistant coaches and player personnel was settled by a defensive unit with 10 tackles for loss and three scoring drives that spanned the first and second quarters. Dart was efficient but not as effective throwing the deep ball, including a second half interception before yielding to reserve Luke Altmyer in the final quarter.

Ole Miss was heavily reliant on the transfer portal to replace major losses from last year’s Sugar Bowl team. One of the most heralded was linebacker Troy Brown of Central Michigan, finishing with 11 tackles.

One of the least heralded transfers was linebacker Khari Coleman of TCU, with a game-high five tackles for loss and two sacks.

“We showed a flash or two of what we can do on defense,” said Brown, showcasing speed in the open field to make tackles. “We still have to patch up some of the little things. But I thought our defense came out and played with energy and that’s what we require is energy.”

The win put the No. 21 Rebels in position to move up, but a major jump would be a surprise. Ole Miss ranks sixth of the six SEC teams in the Top 25.