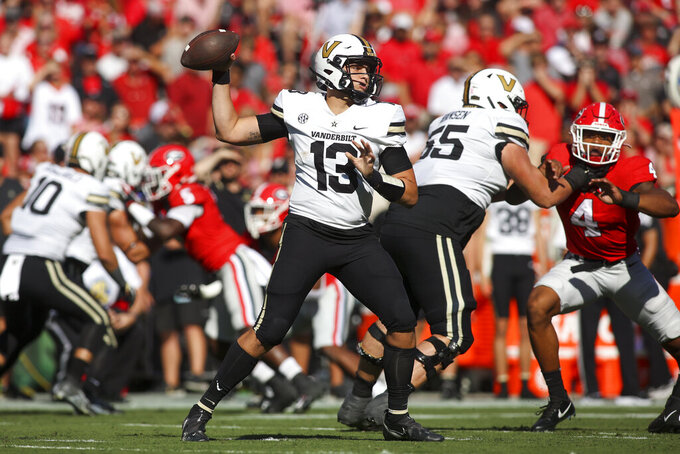 Line: Missouri by 13 1/2, according to FanDuel Sportsbook.

Vanderbilt RB Ray Davis against the Missouri defense. The Commodores haven't been able to slow down anyone this season, allowing 493.7 yards per game to rank 128th out of 130 teams in the Football Bowl Subdivision. So their best chance to slow down the Tigers could be keeping the ball away from them. Davis is fifth in the SEC with 536 yards rushing, and he's averaging 4.5 yards per carry. Vanderbilt would be wise to ride him in an effort to shorten the game.

Vanderbilt: WR Will Sheppard has 39 catches for 497 yards and four touchdowns, and that was after Georgia held him to three catches for 45 yards last week. He caught nine passes for 87 yards and a score against Ole Miss.

Missouri: WR Dominic Lovett is third in the SEC with 499 yards receiving, a mere 2 yards ahead of Sheppard, and has been the best big-play threat the Tigers have on offense. He's been banged up recently, but he's averaging 16.1 yards per catch, and he gives Tigers QB Brady Cook his most reliable passing target.

The Tigers have won five of the past six games in the series. They have not lost to the Commodores at home since Oct. 6, 2012, which was Missouri's first season in the SEC. ... Vanderbilt is 21 of 22 in the red zone after failing to score on its only trip inside the 20 last week against Georgia. ... The Commodores had created a turnover in 15 straight games before failing to produce one against the Bulldogs. ... Vanderbilt has only produced nine sacks all season. ... Commodores LB Anfernee Orji leads the SEC with 71 tackles. He has at least nine in six straight games. ... Missouri is coming off an open date. ... Tigers RB Nathaniel Peat ran 20 times for a career-best 117 yards his last time out at Florida. ... Missouri has trailed by double digits in the first quarter in three of its six games. ... The Tigers are averaging 25.17 points, better only than Texas A&M in the SEC.